Pennsylvania key to Democratic hopes for US midterm elections 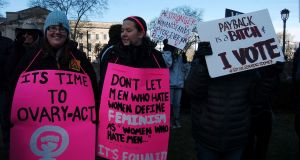 The US Democratic and Republican parties are eyeing the women’s vote as a potential deal-breaker in the midterm elections, given President Donald Trump’s unpopularity among many women voters. Photograph: Cory Clark/NurPhoto via Getty Images

As the results rolled in on election night in November 2016, and the electoral college map began to turn from blue to red, the eyes of the country turned to Pennsylvania.

The battleground state was Hillary Clinton’s final hope to snatch victory from the jaws of defeat.

But shortly after 1.30am, news broke that Pennsylvania had voted for Donald Trump, securing his path to the presidency.

The Keystone State, with its 20 electoral college votes, had backed the Republican nominee, part of the red wave that night that helped propel Trump to the White House.

Two years later, Pennsylvania is again shaping up to be one of the most closely-watched states, this time in the midterm elections.

The state could hold the key to Democrats winning back control of the House of Representatives when America goes to the polls on November 6th.

Up to half a dozen seats are potentially for the taking by Democrats in Pennsylvania. This represents about a quarter of the 24 seats the party needs to win nationwide to gain control of the House.

The reason for the party’s new-found optimism lies primarily in a momentous court decision earlier this year. Following a lengthy legal process, the state supreme court struck down Pennsylvania’s congressional map as unconstitutional.

Pennsylvania had long been regarded as one of the most heavily gerrymandered states in the country. In the last three elections, Republicans have won 13 of the state’s 18 seats in the House of Representatives, despite the fact that the state has a relatively equal percentage of Republican and Democratic voters.

Like many legislatures across the country, the imbalance was a result of redistricting undertaken by Republican-controlled states following a wave of wins by the party in 2010 – Pennsylvania’s oddly-shaped districts, which “wander seemingly arbitrarily across Pennsylvania” as the court ruling put it, were widely seen as the most egregious example of gerrymandering in the country.

The newly-drawn congressional district map more accurately reflects the demographics of the state and is beneficial to Democrats. This, in addition to the fact that incumbent Republicans such as Pat Meehan and Charlie Dent are retiring, have fuelled hopes that Democrats are on track for a major victory in two weeks’ time.

Democratic congressman Brendan Boyle, who represents the 13th district of Philadelphia, is confident about the party’s chances in the state. “I’m very optimistic that we will win at least four congressional seats here at state level – in fact, it is likely that we will pick up more congressional seats in Pennsylvania than any other state in the country.”

While the districting changes will almost certainly benefit Democrats, the party is also hoping to tap into the female vote, and build on the anti-Trump energy that manifested itself in the women’s march shortly after the election. Remarkably, Pennsylvania has no female representation in Congress, an anomaly the party is hoping to address. A record number of women are running for elected office this November across the United States, most on a Democratic ticket.

Here in the affluent suburb of Germantown in the northern outskirts of Philadelphia, Chrissy Houlahan is one of seven Democratic female candidates who will be on the Pennsylvania congressional ballot on November 6th.

Houlahan (51) is running to represent Pennsylvania’s sixth congressional district. A third-generation US army veteran and mother of three, she is also an MIT graduate who has run two start-up companies and also worked as a chemistry teacher. Her Irish-sounding name is courtesy of her husband, whose family hails from Co Kerry.

Like many of the female candidates in this election, she has never before run for public office. As she stops for a coffee before heading to a campaign event nearby, she explains why she was motivated this year to run.

“I never expected to run for anything,” she says, “All I ever did before was vote and occasionally knock on doors. I really thought that governance and politics were for other people, and I was happy doing my job as a citizen, as a member of the military.”

But then 2016 happened. Like many people across the country she was shocked by the election of Trump. In the days following the election she helped organise a bus to travel to Washington DC for the women’s march in the capital.

“Fifty-three women travelled down to Washington for the day. We held a sign-decorating party the evening before, packed chicken and doughnuts and headed to the capital.” This experience was “part of the realisation that I could be helpful,” she explains, “seeing all those women, all those signs, all campaigning for issues – reproductive issues, education, the planet”.

As she campaigns here in the Philadelphia area, she is keen to stress that she is not running solely on a women’s platform. “Women’s issues are family issues, they’re people issues,” she says. “It’s about diversity, about having people around the table who will represent a diversity of views,” she says, adding that it is unacceptable that Pennsylvania has no women representing the state in Congress.

But while Houlahan is reluctant to cast her candidacy as aimed only at females, it is evident that both parties are increasingly eyeing the women’s vote as a potential deal-breaker in these elections, given Trump’s unpopularity among many women voters.

In particular, there are signs that the GOP may be in trouble with college-educated women in suburbs from Philadelphia to Atlanta to Houston.

The Republican Party has been keen to shift Trump’s focus away from issues that could negatively impact on women. Following the president’s description of adult film star Stormy Daniels as “horseface” last week on Twitter, House speaker Paul Ryan, who typically tempers his criticism of the president, was unequivocal. “There is no place for that kind of language . . . he should not have said that,” he said.

With women representing up to 50 per cent of the vote, Democrats hope that by harnessing the female vote on November 6th they could achieve major congressional gains.

Elsewhere in the state, which ranges from urban centres such as Philadelphia and Pittsburgh to rural areas of the rust belt, Democrats are also quietly confident. They cite Conor Lamb, a 34-year-old Democrat who unexpectedly won a special election in a traditionally Republican area.

As well as their hopes for the House, other races on November 6th are looking positive. One of Pennsylvania’s two Senate seats is up for grabs, and Democratic senator Bob Casey has a double-digit lead over his Republican challenger, Lou Barletta. This is despite controversy over an ad he ran criticising Republican healthcare policy which featured a woman whose twin daughters were diagnosed with cancer. Barletta’s own grandson, also a twin, is fighting cancer and the ad was deemed insensitive.

In addition to the Senate race, Pennsylvania’s governor Tom Wolf, a Democrat, is also ahead in the polls.

As Democrats look ahead to November 6th, they are hoping that the state that did so much to dash their hopes of a Clinton presidency in 2016 could be key to a comeback in the midterms.