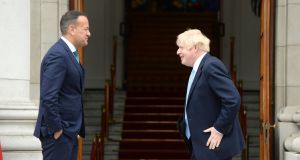 The blame game might end up increasing the risk of no deal. Photograph: Dara Mac Donaill

The member states of the EU have a common negotiating position on Brexit, but they have different ulterior motives.

There is one group, led by Germany, whose priority is to avoid a no-deal Brexit in order to minimise disruption to industrial supply chains. Another group, led by France, seeks to stop the UK from exploiting the opportunities for regulatory arbitrage. The French fear that a Singapore on Thames might undercut EU standards on social policy and the environment. Then there is a third group that wants the UK to reverse Brexit altogether, as a symbol of the fightback against the rising global tide of populism.

What all three have in common is a lack of interest in agreeing to engage with UK prime minister Boris Johnson’s proposals for the withdrawal deal.

They are reassured that the Brexit extension bill passed by the House of Commons has removed the threat of an immediate no-deal Brexit. Legal documents submitted to a Scottish court state that Mr Johnson intends to comply with the requirements of the Benn Act and seek a Brexit delay if he cannot secure a deal.

But even if the deadline is extended once more, the EU should think twice before rejecting the latest UK plan. It is trivially true that an extension buys time, avoids disruption on the day, and maybe even opens up a theoretical path towards a Brexit reversal. But rejection would still be a short-sighted strategy. If the process is allowed to stray past the current October 31 deadline, the EU will have to live with the consequences of rejecting the deal.

The big idea behind the British government’s most recent proposals is to keep Northern Ireland inside the EU’s single market for industrial goods and agrifoods, but outside the EU’s customs union. That sounds complicated, but it is a reasonable starting point: it is easier to find technical solutions for customs procedures than single market rules.

What is unreasonable is to suggest a formal veto for Stormont, the Northern Ireland assembly – which has not sat since 2017 when the power-sharing arrangement between the Democratic Unionist party and Sinn Féin collapsed.

But by rejecting the whole package, the EU would reveal that it can only offer a limited range of future relationships: Theresa May’s old deal or full membership of the single market and the customs union.

Since all Brexit deals proposed by a UK government would have been rejected, no-deal would then be the one Brexit option that is left. The Conservative party would campaign for it at the next general election. Also consider that, without a deal, it would be hard to know what question to put on a ballot paper in any future second referendum.

I do not believe that EU leaders have thought this through. There are few people who spend their days thinking strategically on the EU’s behalf. National leaders act in their country’s self-interest, as they did during the euro zone crisis. The only European institution accustomed to acting strategically for the entire area is the European Central Bank.

So what would constitute an intelligent strategy for the EU as a whole? Brexit has weakened the EU, but not fatally. My first priority now would be to prevent a large economic shock.

The volume of trade between the EU and the UK was £634 billion in 2018. The total trade volume between Northern Ireland and the Irish Republic was £5.4 billion. This is a ratio of more than 100 to one. I understand why the rest of the EU places a higher value on the interests of Ireland than the UK. I do not understand why they place so little value on their own interests.

There is a lot of muddled thinking around. The obsession with avoiding blame is alarming. When you ask why Dublin prefers a no-deal Brexit to a compromise on the backstop, you keep getting the same answer. Ireland’s prime minister Leo Varadkar can blame the UK for the fallout from no deal, but the Irish would blame him personally if he compromised. In Brussels, I keep hearing that the EU does not want the blame for a no-deal Brexit. So it seems that the biggest problem with a no-deal Brexit is not the thing itself but who is held responsible. This blame game might end up increasing the risk of no deal.

France and Germany have different ulterior motives, but a no-deal Brexit serves neither of them. Strategically, it would be better for the EU to accept the parameters of Mr Johnson’s proposal, minus the nonsensical veto rights for Stormont. The EU should extend the deadline for a final time to complete the negotiations in all its technical details and allow time for ratification. The UK should undertake to abide by common standards on social protections and environmental standards.

There is a deal to be done – and a gamble to be lost. – Copyright The Financial Times Limited 2019

1 Wetherspoon’s panto-villain chairman may have the last laugh
2 UK needs to be honest about its Covid-19 strategy
3 British exceptionalism backfires in style as Johnson tests positive for coronavirus
4 Will Covid-19 force Primark to rethink decision not to sell online?
5 Retail landlords worried rents will dry up during Covid-19 crisis
6 ESB paying exchequer €88m dividend a pointless exercise
7 I was a gig economy employee with a virus who couldn't afford to self-isolate
8 Volkswagen burning through €2bn in cash per week
9 Remote working doesn’t suit everyone, and it exposes woolly leadership
10 ESRI warns Ireland heading for recession this year as Covid-19 hits economy
Real news has value SUBSCRIBE