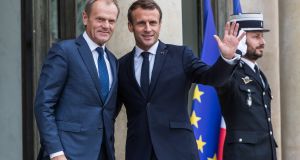 The Irish Government has been praised in Paris for its conduct throughout the Brexit saga.

“The Republic of Ireland succeeded in a true diplomatic tour de force,” the newspaper said. “It made the interests of a little country on the western edge of the EU, which by the way is not co-operative on other issues sensitive for Brussels, such as taxation, a priority of the 27 [EU members].”

The UK repeatedly made the mistake of trying to “bilateralise” Brexit negotiations, an adviser to French president Emmanuel Macron said on Tuesday, while pointing out that EU unity did not preclude contacts between political leaders. For example, Macron spoke to Johnson on the telephone on Tuesday morning.

“When Boris Johnson and Leo Varadkar saw each other a few days ago, Ireland played the European game perfectly,” the adviser at the Élysée said. “Mr Johnson made political overtures, and it was referred to the 27 for negotiations. It’s not Mr Varadkar or the Irish team negotiating with the British today. It’s Michel Barnier and his team.”

Ireland “never acted to the detriment of, in the place of or in competition with [Barnier’s] channel, including for subjects that appear very Irish or British-Irish, such as the backstop and border controls,” he said.

The Élysée sees EU solidarity with Ireland as a shining lesson of the benefits of EU membership. “It is the profound meaning of the EU project that a member state which is in difficulty, whether it be an attack, an economic threat or a political difficulty, must be supported by the others,” the adviser said.

“If belonging to the EU means anything, it is that there must be no ambiguity or hesitation about protecting the fundamental interests of a member state, and that is valid whatever the size of the country. It is valid for a country of five million inhabitants, like Ireland.”

The fact that the Border between Northern Ireland and the Republic will become the EU’s only land border with Britain was “the second reason why Ireland was at the heart of the negotiations”, the adviser added.

Though the Élysée hoped for an imminent agreement, the adviser warned that the summit in Brussels on Thursday and Friday must not be “a catch-up session or the continuation of technical or detailed negotiations. It will be the moment to endorse or formalise a political agreement, but in no event a nocturnal extension of tough negotiations”.

Macron and German chancellor Angela Merkel will co-ordinate their positions at a Franco-German cabinet meeting in Toulouse on Wednesday, where they will be joined by their ministers for defence, foreign affairs, European affairs, finance, culture and the interior.

The meeting will focus on trade tensions with the US and co-operation in industry and innovation, in particular artificial intelligence and military procurement. Paris and Berlin are developing a combat aircraft and a battle tank together.

Toulouse is the site of the Airbus 350 assembly line, considered one of the most successful Franco-German projects.

Franco-German relations are often rendered difficult because of international events external to them, the adviser said. “It’s the situation that is difficult, not France and Germany. ”

Macron’s approach has been to attempt to reach compromise on areas of discord, such as the reform of the euro zone, not to paper over disagreement.

The French president believes “there is no alternative or possible substitute for the Franco-German relationship. It is irreplaceable,” the adviser continued. But, at the same time, it is “not an exclusive relationship”. Under Macron, “France is working much more with other partners, for example the Netherlands and central Europe, than before.”

Macron received a stinging rebuke from the European Parliament when it vetoed the appointment of Sylvie Goulard as a member of the European Commission. Macron had secured a weighty portfolio for her, including the internal market, industry, defence, space, digital technology and culture.

The Élysée said the attributes of the portfolio reserved for France must not change. Macron wants the “political instability” of the parliament, which has no clear political majority, to be addressed before he chooses a new commissioner.