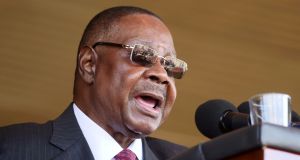 Peter Mutharika, Malawi’s president since 2014, won a close election in 2019 with a 38.57 per cent share of the vote. Photograph: Reuters/Eldson Chagara

Malawi’s presidency said on Wednesday it would appeal against a court ruling that overturned Peter Mutharika’s narrow election victory, calling the order “a great miscarriage of justice”.

Presidential spokesman Mgeme Kalirani said the office had assembled papers for its legal challenge. “The ruling . . . cannot be allowed to stand,” his statement read. “It will create a lot of problems in the country’s jurisprudence.”

The constitutional court stunned Malawians on Monday when it annulled the May 2019 vote that returned Mr Mutharika to power as president. The court cited “widespread, systematic and grave” irregularities, which included results sheets with sections blotted out or altered with correction fluid.

It ordered a re-run, triggering widespread celebrations by opposition supporters.

Mr Mutharika, Malawi’s president since 2014, won a close election with a 38.57 per cent share of the vote. Opposition party leader Lazarus Chakwera got 35.41 per cent and deputy president Saulos Chilima, who had formed his own party, got 20.24 per cent.

Many observers welcomed the court’s decision as a democratic milestone for a continent where judges often play it safe by ruling in favour of the winning incumbent in a disputed poll.

“It’s a reminder that where institutions retain independence and professionalism it is possible to correct wrong politics,” Zimbabwean opposition leader Nelson Chamisa, the loser of Zimbabwe’s 2018 race, said on Tuesday.

“For too long our continent has been plagued by the scourge of unfair elections,” he said in a statement.

In 2017, judges in Kenya annulled elections there and ordered fresh polls on similar grounds of malpractice, although President Uhuru Kenyatta won the new election anyway when the opposition leader boycotted the poll.

In a unanimous decision, a panel of five judges ordered that Malawi should hold a presidential vote within 150 days, upholding complaints from Mr Chakwera, the president’s main rival, and Mr Chilima.

Mr Mutharika, a 79-year-old former law professor, has managed to rein in rising prices of basic goods and improved Malawi’s roads and other infrastructure. However, critics accuse him of cronyism and failing to tackle graft. – Reuters