Romania edges towards snap elections as another government falls 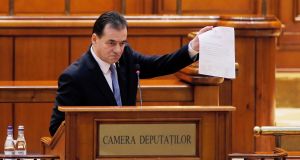 Romanian prime minister Ludovic Orban has brushed off deputies’ dismissal of his government after just three months in office, as it brings closer the prospect of snap elections that could give his National Liberal Party (PNL) a firm grip on power.

Parliament in Bucharest voted 261-139 on Wednesday to remove Mr Orban’s cabinet, after a no-confidence motion was lodged over its attempt to change the rules under which local elections would be held across Romania in June.

The centre-right PNL took power in November, when deputies voted to oust a government led by the Social Democrats (PSD), whose 2½-year rule was marked by major street protests and sharp criticism from the European Union over attempts to weaken Romania’s anti-corruption laws to the benefit of some party members.

“A parliament dominated by retrograde forces . . . that has trampled on democracy and the fundamental interests of Romania, has decided today by censure motion to bring down the government,” Mr Orban said.

“We are proud of what we did in three months,” he added. “We repaired a lot of things broken by the Social Democrats, we brought Romania back to the European fold.

“We’ve lost a battle but we will win the next battle for Romania . . . The government has fallen, but it has fallen on its feet.”

Romanian president Klaus Iohannis will now name a candidate to lead a new government, and he has suggested that he is minded to nominate Mr Orban again.

The current cabinet will stay on in a caretaker capacity, and if Mr Iohannis twice nominates premiers whose governments fail to win deputies’ backing within a total of 60 days, then he can dissolve parliament and call snap elections.

Polls indicate that the PNL is now by far Romania’s most popular party, and it would welcome parliamentary elections being held earlier than December, when they are currently scheduled.

A survey published this week put support for the PNL at 47.4 per cent, with the PSD on 20.6 per cent, following a poor showing by the latter at the ballot box last year.

The PSD suffered a crippling triple blow last May, when it performed badly in European elections, lost a simultaneous referendum on its contentious legal reforms and saw then party chief and de facto government leader Liviu Dragnea jailed on graft charges the following day.

Mr Iohannis then comfortably saw off the challenge of former PSD prime minister Viorica Dancila in November to secure a second term as president.

“The Orban government has fallen. In my opinion it’s a very big step for Romania’s democracy . . . I am glad, because it means that many colleagues have woken up. I could not mobilise them as well as Mr Orban,” PSD leader Marcel Ciolacu said after the no-confidence vote.

The PSD is eager to avoid early elections that could severely weaken its position in parliament, and it fiercely opposed the outgoing government’s bid to reintroduce two-round voting in June’s local elections, instead of the current first-past-the-post system that has been in operation since 2012.

Analysts said the PSD could lose its traditional dominance at local level if smaller parties were able to join forces against PSD candidates in run-offs.