US presidential debate: Eight standout moments from the past 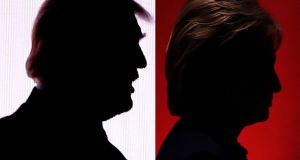 The debate between Democratic nominee Hillary Clinton and Republican Donald Trump is expected to set new TV viewership records with some pundits expecting as many as 100 million to tune in. Photograph: AFP/Getty Images

The significance of presidential debates in determining the outcome of the US elections have themselves long been the subject of debate by presidential scholars and political pundits.

In the media spotlight in front of tens of millions of viewers watching the candidates face off against each other, gaffes are magnified and replayed over the remainder of the campaigns.

Monday night’s debate between Democratic nominee Hillary Clinton and Republican Donald Trump is expected to set new TV viewership records with some pundits expecting as many as 100 million to tune in. This would break the record audience of 80 million who watched the 1980 debate between Democratic president Jimmy Carter and Republican Ronald Reagan.

The vice-presidential debate in 2008 between Republican Sarah Palin and Democrat Joe Biden was the second most watched campaign debate event, drawing 69.9 million viewers.

“Most debates, in my opinion, historically haven’t had had a major impact on the eventual votes,” said James Thurber, professor of government and the founder of the centre for congressional and presidential studies at American University in Washington.

“This year may be different. It has been a unique, weird election with Trump.”

Here are the eight standout debate moments from past presidential elections:

Nixon is said to have won the 1960 election on radio but lost it on television. In the first televised presidential debate, Nixon looked distinctly uncomfortable, sweating and needing a shave. He was recovering from a knee injury and declined to wear make-up, accentuating his pasty complexion. In contrast, Kennedy, fresh from campaigning in sun-kissed California, looked refreshed, relaxed and tanned, speaking directly to the American people through the camera.

During their debate in October 1976, president Gerald Ford botched a prepared talking point and inaccurately declared: “There is no Soviet domination of eastern Europe and there never will be under a Ford administration.” Carter said that he would like to see Ford convince Polish-, Czech- and Hungarian-Americans that their home countries did not live under Soviet supervision behind the Iron Curtain. Time magazine called it “the blooper heard around the world”.

Reagan responded to a long, rambling monologue from Democratic president Jimmy Carter that the Republican candidate was campaigning against Medicare, government-funded healthcare for the over 65s, with a zinger undermining his argument with one phrase: “There you go again.”

Ronald Reagan, seeking re-election at the age of 73, tackled the question of whether he was too old for a second term with humour when the question was asked during his debate with Democrat Walter Mondale, then 56 years old. Reagan deadpanned: “I am not going to exploit, for political purposes, my opponent’s youth and inexperience.” The quip had even Mondale laughing. Reagan won the election by a landslide.

With the first question in the second debate of 1988, CNN moderator Bernard Shaw tried to crack the passionless Democratic candidate, Massachusetts governor Michael Dukakis with a deeply personal question: if his wife was raped and murdered, would he favour an irrevocable death penalty for the killer? “No, I don’t Bernard.” He answered the question in line with a policy position but his clinical, cold response alienated voters and his poll numbers dropped that night.

In one of the most famous putdowns of an election, Democratic vice-presidential candidate Lloyd Bentsen reacted to an attempt by his Republican counterpart Dan Quayle, running mate to George HW Bush, to compare his own political experience with that of former president John F Kennedy with: “Senator, I served with Jack Kennedy. I knew Jack Kennedy. Jack Kennedy was a friend of mine. Senator, you’re no Jack Kennedy.”

President George HW Bush looked at his watch during the closing moments of the debate when he was asked a question about how the national debt personally affected him and how he could resolve the economic problems of everyday Americans. He stumbled through the answer.

During their presidential debates, Democratic vice-president Al Gore sighed loudly, frowned or rolled his eyes in response to answers from his opponent, Texas governor George W Bush, appearing supercilious and creating the impression that his Republican rival did not deserve to share a stage with him. During their third debate, Gore tried to intimidate Bush by walking up next to his rival during a walkabout town-hall style debate and into his space. He miscalculated the physical confrontation. Bush nodded dismissively at his opponent.