US launches air strikes on Iran-backed militia site in Syria

US Secretary of Defense Lloyd Austin said that he was confident they had hit the correct targets. President Joe Biden directed the airstrikes in eastern Syria against facilities belonging to what the Pentagon said were Iran-backed militias. Video: Reuters 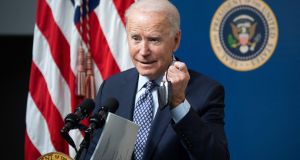 The United States launched air strikes on an Iranian-backed militia site in Syria on Friday in the first known military intervention by President Joe Biden since his inauguration as US president.

The Pentagon announced that the targeted strike had destroyed “multiple facilities located at a border control point used by a number of Iranian-backed militant groups”, and had been authorised in response to recent attacks against American and coalition forces in Iraq and “ongoing threats to those personnel.”

The London-based Syrian Observatory for Human Rights said that 22 people had been killed in the strikes that took place at 1am local time on Friday.

The intervention targeted a small site near the Iraqi border which the US says has been used as a weapons-smuggling site. It follows three attacks against US forces in recent weeks, including a February 15th rocket attack near the city of Erbil which killed one foreign contractor and injured several others. An attack in Baghdad’s heavily fortified Green Zone this week was also believed to have targeted the US embassy.

A Pentagon spokesman said the strikes were “proportionate” and delivered an “unambiguous message: President Biden will act to protect American and coalition personnel. At the same time, we have acted in a deliberate manner that aims to de-escalate the overall situation in both eastern Syria and Iraq.”

The development comes at a sensitive moment in US-Iranian relations as the Biden administration considers rejoining the Iran nuclear deal.

Iran has been increasing its nuclear stockpile, following President Donald Trump’s withdrawal from the Joint Comprehensive Plan of Action (JCPOA), the official name for the landmark 2015 nuclear deal.

The Biden administration has indicated that it is prepared to begin negotiations with Tehran and has been working closely with Britain, France and Germany, the three European signatories to the deal, this month.

The US said the air strikes took aim at sites used by Iranian-backed militant groups including Kaitib Hizbullah and Kaitib Sayyid al-Shuhada.

The US believes that Kataib Hizbullah carried out the strike in Erbil on February 15th, though the group has denied responsibility. Defense secretary Lloyd Austin, who was travelling in California when news of the air strikes emerged on Thursday night, said the Pentagon was confident in the target.

“We’re confident that that target was being used by the same Shia militants that conducted the strikes,” he said. “We know what we hit.”

The White House said that it had briefed congressional leadership before the attack, and would deliver a full classified briefing early next week.

Several Republicans said they backed the move by Mr Biden. Congressman Michael McCaul, the top Republican on the House foreign relations committee, said: “Responses like this are a necessary deterrent and remind Iran, its proxies, and our adversaries around the world that attacks on US interests will not be tolerated.

But some Democrats criticised the move, including senator Chris Murphy, “Congress should hold this administration to the same standard it did prior administrations, and require clear legal justifications for military action,” he said, noting that Congress had not authorised any military action in Syria.

Russian foreign minister Sergei Lavrov condemned the strike, stating that Russia had only received a five-minute advance warning of the action.