US must choose between cold war or coexistence with China

World View: European states and most US allies in Asia would be more open to engagement with China than Biden would like 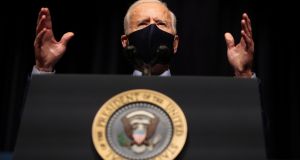 US president Joe Biden: China is the most important foreign policy issue facing the US. Photograph: EPA/Oliver Contreras

When and how does extreme competition between the US and China tip over into a new cold war of decoupling and containment? Or can their existing economic interdependence and entanglement be translated into a new geopolitical coexistence?

Such questions and vocabularies surround the early days of president Joe Biden’s China policy, the most important foreign policy issue facing the US.

There will be more continuity than rupture between his approach and Donald Trump’s recently hawkish one than many expect, reflecting a new policy consensus. But Biden’s officials say they will be far more coherent and considered in conducting it.

They are taking care to consult Asian and European allies. And they have to balance off different US objectives on investment, climate change, regional stability and human rights as they decide on strategic priorities.

The competitive terminology was used by Biden before his first phone call to President Xi Jinping this week. After it he tweeted, “I will work with China when it benefits the American people”.

One victim of the new Washington consensus is the belief guiding the US’s China policy from the 1990s, that making China a responsible stakeholder in the international system dominated by western institutions would gradually moderate its behaviour and liberalise its politics. Those assumptions are now mocked in a more realist and hostile policy stance.

Instead of such an accommodating policy China under Xi since 2012 has: promoted its Asian and worldwide presence through the Belt and Road Initiative; distributed its huge productive and state-financed fiscal surpluses through these and similar pathways; committed itself to a made-in-China plan for greater self-production with targets in 2025, 2035 and 2049; ruthlessly oppressed and detained the Muslim Uigher population; suppressed domestic critics and Hong Kong rebels; and asserted itself militarily in the South China Sea and against Taiwan.

This catalogue of transgressions is now a common currency of China’s international critics. Yet not all of them draw decoupling and containment conclusions from it.

European states increasingly promote an EU policy more open to critical engagement with China than the Biden administration likes. So do most US Asian allies, who are not willing to accept such a binary policy that asks them to sacrifice their deep links with such a huge neighbouring power.

Neither set of allies can disregard Trump’s disruptive transactional approach, nor the deep distrust it generated. They are more inclined to assert their own interests. As Eva Pejsova, a perceptive European analyst of the Asian scene, says of Biden’s multilateralism: “If the US is back, that’s great, but the world is not the same as it was four years ago. Let’s not forget that in the past four years most US allies have also done their bit. Europe doesn’t want to give up the whole idea of strategic autonomy just because the US is back.”

Biden may find that European and Asian mutual interests in a more multipolar world complicates his China policy in both regions. They both prefer an Indo-Pacific that is free and open to one directed against China.

Another dimension complicating any simple Biden decoupling policy is captured in a recent Financial Times headline: “US-China investment flow belies geopolitical tension”. The rich US plutocracy, which supported Trump’s radical deregulation of the American economy, continues to invest profitably, led by funds like Fidelity and Blackrock.

The sheer scale of these changes, along with China’s own strategic political autonomy, is making it the world’s largest economy – quite unlike the relatively poor yet strategically powerful Soviet Union that was the subject of US-led containment in the 1950s.

A better policy than economic decoupling would encourage the Chinese to develop a pension system releasing savings and to end the hukou permit system to empower its hundreds of millions of migrant workers with fuller citizenship rights and spending power.