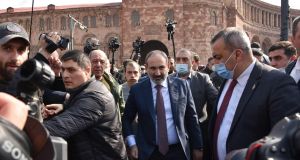 Armenian prime minister Nikol Pashinyan has defied what he called a coup attempt by top military officers, who urged him to resign in the wake of the nation’s bitter defeat to Azerbaijan in fighting over the Nagorno-Karabakh region.

Mr Pashinyan called for dialogue between the government and opposition to defuse tension, but there was no sign of a swift resolution to a potentially explosive conflict between Armenia’s political leader and military top brass.

“The most important task now is to keep power in the hands of the people, because I consider what is happening to be a military coup.”

Mr Pashinyan has been under pressure to quit since last November, when Azerbaijan won a six-week conflict over Nagorno-Karabakh and reclaimed swathes of territory that ethnic Armenian forces had controlled for more than 25 years.

“The ineffective management of the current government and serious mistakes in foreign policy put the country on the brink of collapse,” the general staff said on Thursday morning.

“In light of this situation, the armed forces demand the resignation of the prime minister of Armenia’s government, while warning against the use of force against the people.”

The confrontation was sparked by continuing recrimination over the defeat to Azerbaijan: on Wednesday, deputy chief of the general staff Tiran Khachatryan laughingly dismissed Mr Pashinyan’s criticism of how Russian-made missiles performed during the war, and he was promptly sacked by the premier.

The general staff said it rejected this “short-sighted and unfounded” decision, allegedly taken “without considering the national and state interests of Armenia, based only on personal feelings and ambitions”.

“The prime minister and government of Armenia are no longer able to make adequate decisions in this crisis and in this fateful situation for the Armenian people,” dozens of senior officers said in their statement.

Mr Pashinyan and opposition parties called rival rallies in the centre of the Armenian capital, Yerevan, and the Associated Press reported that more than 20,000 people attended each one.

The prime minister told his supporters that the so-called coup was led by officers who did not want to be held to account for military failings during the fighting with Azerbaijan, and those with links to the political opposition.

“I became prime minister . . . because the people decided so. Let the people demand my resignation or shoot me in the square,” he declared.

In a second statement issued on Thursday afternoon, the general staff officers insisted they were not acting under political influence, but “out of clear conviction . . . and with a single goal: to save the motherland at this crucial moment.”

The Kremlin said Russian president Vladimir Putin spoke to Mr Pashinyan and called for “the preservation of order and calm” in Armenia.

The European Union said it was crucial for Armenia to maintain its “democratic and constitutional order,” and the US embassy in Yerevan urged all sides “to de-escalate tensions peacefully”.