US imposes sanctions on Hong Kong leader Lam and 10 officials 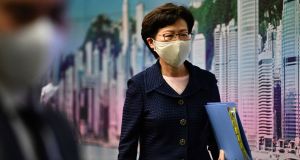 Hong Kong leader Carrie Lam: “I have no assets in the US, and I don’t particularly like going to the US.” Photograph: Anthony Wallace/AFP via Getty Images

The US government has imposed sanctions on Hong Kong’s leader Carrie Lam and 10 other senior Chinese and Hong Kong officials in response to a crackdown on free speech and political freedoms in the city, the US treasury department has said.

The measures are among the most high profile taken by the US administration in a broad campaign to challenge China at home and internationally as tensions between the world’s two largest economies escalate sharply.

In addition to Ms Lam, sanctioned Hong Kong officials include the current and former head of the city’s police force, criticised for its brutal response to protests, and the cabinet secretaries for justice Teresa Cheng, and security John Lee Ka-chiu.

From the mainland, sanctioned officials include Luo Huining, the director of the Hong Kong Liaison Office, the most senior Chinese authority in the city, and Zheng Yenxiong, a hardliner appointed to the newly created position of security chief.

“The United States stands with the people of Hong Kong, and we will use our tools and authorities to target those undermining their autonomy,” said secretary of the treasury Steven Mnuchin.

The sanctions have been brought in under an executive order that Donald Trump signed last month in response to China’s introduction of a sweeping new security law in Hong Kong.

Beijing said the law was needed to restore stability and would not threaten Hong Kong’s freedom of expression.

However, it has already been used to crush dissent, cited in the barring of moderate pro-democratic candidates from elections, the arrest of teenagers for social media posts, and the suppression of popular protest slogans.

The law has been widely condemned by western governments, and has led many to reconfigure their relationship with Hong Kong, including ending extradition agreements.

The US has ended special economic status for the city, which is likely to batter an economy already badly damaged by Covid-19.

Ms Lam has previously said she is not worried about sanctions.

“I have no assets in the US, and I don’t particularly like going to the US. If they won’t grant me a visa, then I will just not go there,” she said in a TV interview last month.

The sanctions come the day after Mr Trump announced that he would ban transactions with the companies that own popular apps TikTok and WeChat.

Last month the administration also imposed sanctions on Chinese companies and a paramilitary government organisation it alleged were complicit in forced labour and other abuses in the western Xinjiang region. – Guardian