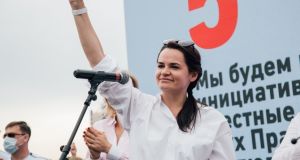 Belarusian leader Alexander Lukashenko has accused foreign powers of waging a “hybrid war” to destabilise his country, ahead of presidential elections on Sunday that have sparked a surge of opposition to his authoritarian rule.

The former Soviet state farm boss, who has run Belarus for 26 years, portrays himself as the only politician strong enough to avert the violent chaos that he claims enemies to east and west want to unleash in the country of 9.5 million.

The growing opposition movement, which demands democratic reforms and has drawn tens of thousands of people to its campaign rallies, says an increasingly desperate Lukashenko is again trying to scare the nation into silence.

“I honestly admit...we don’t know what they are capable of. We don’t even know who they are,” Lukashenko said of people who he claimed were in Belarus intending to sow chaos in the coming days.

“Either it’s the Americans and Nato, or someone is pressing us from Ukraine, or it’s our eastern ‘brothers’ who love us so much,” he said in reference to Russia. “A hybrid war is being waged against Belarus and we should expect dirty tricks from any side.”

Belarusian security services arrested 33 Russian mercenaries last month and accused them of plotting “terrorist acts” around the election, and Lukashenko said other people who had been detained had “American passports [and were] married to Americans, working in the [US] state department.”

Lukashenko also warned Belarusians not to attempt to launch the kind of protests that saw Ukrainians oust their then Kremlin-backed rulers in 2014, with rallies centred on Kiev’s Independence Square, popularly known as Maidan.

“Here some people continue to call people to a ‘Maidan’ on [August] 9th or 10th. God forbid that we start a fire in the centre of Minsk... We cannot and will not allow that,” Lukashenko said.

He has looked increasingly out of touch – and out of new ideas – as an opposition camp led by three women has mobilised Belarusians disillusioned by political and economic stagnation and angered by Lukashenko’s blasé response to a coronavirus pandemic that he dismissed as “psychosis”.

His main opponent on Sunday will be Svetlana Tikhanovskaya (37), who decided to run for president after her husband, an opposition blogger, was jailed earlier this year.

Alongside the campaign manager of another Lukashenko critic who was imprisoned, and the wife of a third opposition challenger who was barred from running, the former English teacher has helped re-energise Belarusian politics.

Tikhanovskaya – who spent several childhood summers in Roscrea, Co Tipperary, with other people affected by the 1986 Chernobyl nuclear disaster – says she would use the presidency to release political prisoners in Belarus and organise free and fair elections, before resigning and returning to life as a housewife.

She sent her two children abroad for their own protection as state pressure grew on her campaign and members of her team – as well as activists and independent journalists – have been detained in recent days. More than 1,000 people have been detained since May at protest rallies.

Lukashsneko has said Belarus is not ready for a female president, but he would risk outraging many more of his compatriots if he allowed his security services to use violence directly against Tikhanovskaya and her fellow opposition leaders during any post-election protests.

Lukashenko must also now manage a deteriorating relationship with Russia, which was outraged by the arrest of the mercenaries – several of whom are sought by Kiev for allegedly fighting for Moscow-led separatists in eastern Ukraine; Russia insists the men were simply passing through Belarus en route to another, unnamed country.

The Kremlin said Russian president Vladimir Putin spoke to Lukashenko on Friday, and “expressed certainty that the situation would be resolved in the spirit of mutual understanding that characterises co-operation between the two countries”.

Putin also emphasised that Russia “hoped for the preservation of a stable domestic political situation in Belarus” and for the elections “to be held in a peaceful atmosphere.”

Traditionally warm ties between the neighbours have cooled recently, as Lukashenko resists Kremlin efforts to accelerate integration of Russia and Belarus in a so-called union state, which Moscow would inevitably dominate.

The state-led Belarusian economy would face severe difficulties without discounted Russian energy supplies, however, while relations with the West depend at least in part on Lukashenko’s behaviour towards the opposition and the conduct of Sunday’s vote.

“During the electoral campaign, the Belarusian people have shown unprecedented political mobilisation in favour of free elections and democracy. The peaceful mobilisation of the society has been met so far with unacceptable further restrictions on freedoms,” EU foreign policy chief Josep Borrell said on Friday.

“The EU remains committed to strengthening its engagement with the Belarusian people,” he added.

“We support the independence and sovereignty of Belarus, while human rights and democracy will remain at the forefront of the EU’s considerations when shaping its policy towards the country.”