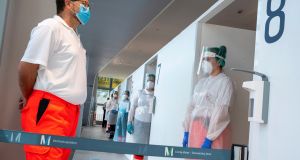 Covid-19 testing facilities at Munich airport, Germany. Travellers coming back into the country from certain high-risk regions and countries have to be tested for the virus. Photograph: Peter Kneffel/ via AP

German holidaymakers will face fines of up to €25,000 if they refuse a Covid-19 test from Saturday on returning from the US, Turkey and other countries viewed as Covid-19 risk areas.

Growing numbers of Covid-19 clusters around the country have pushed Germany’s daily new infection rate into four digits again for the first time since early May – amid a staggered reopening of schools.

Returnees will be required to register their details at airports, and either agree to carry out a Covid-19 test within 72 hours at their own expense or undergo a free test at the airport or Autobahn border checkpoints.

“If we can stabilise at a particular level then we can cope,” said Jens Spahn, the federal health minister. “If the numbers rise further then it depends on all of us to watch out for each other and make further measures unnecessary.”

The business lobby of the ruling Christian Democratic Union (CDU) is urging the Merkel administration to ban all travel to high-risk countries rather than risk the “considerable difficulties” for firms of a second lockdown.

Germany has been phasing in testing at airports over recent weeks. Munich airport, one of the country’s busiest, is already carrying out more than 9,000 voluntary tests daily.

A new opinion poll shows 93 per cent of Germans support obligatory tests for holidaymakers from high-risk areas, but opinion is divided over who should foot the bill. Some 57 per cent say that holidaymakers should finance the €130 tests, while 39 per cent think it is correct to pass the bill on to the taxpayer.

Just which countries are classified as high-risk areas is in flux. Most African, Asian and Middle East countries are on the list, as well as Israel, Luxembourg and the region of Antwerp. German health officials use a combination of criteria including more than 50 new cases per 100,000 population in the previous seven days.

While Germany has flagged three regions of Spain, including Catalonia, Austria has classified all of Spain as a high-risk area from Monday.

Populous states in Germany such as Bavaria and North Rhine-Westphalia have seen a rise in local clusters of infection, raising question marks about the staggered reopening of schools in Germany’s 16 federal states.

Hamburg schools welcomed back students on Thursday, while Berlin and Brandenburg are set to follow on Monday.

Hundreds of children were sent home from two schools in a regional outbreak in Mecklenburg-Western Pomerania after just four days of lessons. The state, on Germany’s northeastern Baltic Coast, became the first to reopen full time since March with new hygiene measures.

In one school a teacher tested positive for Covid-19, requiring all 55 other staff members to take a test. In a second school 100 primary school pupils were sent into a two-week quarantine after a classmate tested positive.

Despite rising infection numbers a leading German promoter has announced plans for an open-air concert in a month’s time, with Bryan Adams the main act. Some 13,000 concert-goers are expected, and all are expected to wear masks.