US election: The scrap for Scranton – and Pennsylvania

Joe Biden should win in his home town. But the state of Pennsylvania could go either way 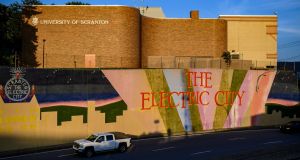 At the Downtown Deli in Scranton, Pennsylvania, orders of pancakes, French toast and endless cups of coffee are piling up during this busy lunchtime. The popular dining spot has been doing a brisk trade since socially distanced dining resumed this summer.

Michelle, a waitress in her late 30s, is rushing between tables. She’s a teacher, but says she needs to work a second job to make ends meet. “Every teacher I know has at least two jobs. I usually work weekends, but have been here all summer because the summer camp I usually work at was closed due to the virus.”

A mother of four, she says she’s voting for Joe Biden in November, but a lot of people she knows, including her parents, are Trump supporters. “They’re retired teachers, and always voted Democrat. But things have really changed around here.”

Scranton, a small city of about 75,000 people, should be easy territory for Biden. He was born and raised in the northeastern Pennsylvania town, before moving to Delaware at the age of 10 after his father lost his job and went south for work.

On the northern side of town, the grey slated detached house still stands where Biden spent his early years. The former vice-president often highlights his experience growing up in a working class, Irish Catholic community. While Trump has said that Biden overplays his Scranton connections, telling voters he “abandoned” Pennsylvania, Biden’s links with the town in fact go back generations.

The Scranton of Biden’s childhood is still evident...But Scranton also symbolises the demise of a once-thriving industrial centre

His great, great grandfather, Patrick Blewitt, emigrated from Ballina, Co Mayo, in 1851 and settled in Scranton.

Another branch of his family, the Finnegans from Co Louth, also emigrated in the 1850s, settling in New York state first before moving to the burgeoning Pennsylvanian city.

Nestled in a valley surrounded by forests and hills, the town attracted settlers in the 19th century due to its abundant iron ore and coal reserves. It quickly developed as an energy and railway hub. At one point it was home to the biggest iron company in the country, focused mainly on producing rail tracks for the rapidly expanding railroad network.

Today, the old iron furnaces and disused railtracks are a reminder of another era. Instead, Scranton is better known as the setting for The Office, the American equivalent of Britain’s Slough in Ricky Gervais’s original hit series.

The ebbing fortunes and dynamics of the city encapsulate the changes that have taken place in rural Pennsylvania and broad swathes of the post-industrial midwest that helped deliver Donald Trump to the White House in 2016.

Pennsylvania, bordered by New York and New Jersey to the east, and Ohio and West Virginia to the west and southwest, was one of a trio of states that voted for Trump in 2016, along with Michigan and Wisconsin.

Electorally, it is the most important given its size. With a population of almost 13 million people, it has 20 electoral college votes – a crucial building block on the road to securing the 270 electoral votes needed to win the US presidential election.

His message of working class grievance resonated here, particularly in the rural counties that make up the bulk of the state. Voters turned out in their millions for the Republican nominee, enough to tilt the state red for the first time in decades, despite the strength of the Democratic vote in the two big cities of Philadelphia and Pittsburgh.

Counties that had seen traditional industries such as coal and steel decline put their faith in Trump. It was part of a broader pattern of disillusionment by many working class, mostly white, Americans with the politics of the Democratic party, and particularly the candidacy of Hillary Clinton, who was successfully cast by Trump as a coastal elite, more worried about debates on transgender bathrooms than the pay cheques of ordinary Americans. White voters without four-year college degrees account for about half of Pennsylvania’s electorate, according to some estimates.

Four years later, Democrats are hoping to win back the state. Biden’s personal connections with the state, and his “Scranton Joe” persona as an ordinary American who understands the everyday challenges of ordinary people, is likely to make him better placed than Clinton to win the state.

The state has always been central to his election strategy. He launched his campaign in April 2019 at a union hall in Pittsburgh. This week he was back as part of a train journey through Ohio and Pennsylvania after Tuesday night’s presidential debate. Crossing into Pennsylvania he told supporters in Pittsburgh that Trump had left a “trail of lies” through the industrial midwest. “They’re coming back home,” he said of the Republican voters who once backed Democrats in the region.

But just as Biden is focusing much of his campaign in Pennsylvania, so is the Trump campaign.

President Donald Trump and vice-president Mike Pence have crisscrossed the state over the past few months, as Republicans try to protect their 2016 victory.

Shortly after announcing Amy Coney Barrett as the replacement for Ruth Bader Ginsburg on the Supreme Court last weekend, Trump flew to Middletown, Pennsylvania for a rally that night, where shouts of “Fill that Seat! ” erupted. Vice-president Pence attended a “debate watch party” in the east of the state to watch Tuesday night’s presidential debate.

While Biden is leading in polls in Pennsylvania, the challenge for Democrats is on display in Luzerne County, just a few miles south from Scranton in northeastern Pennsylvania. The county is one of a clutch of districts across the country that voted for Barack Obama in 2008 and 2012 but swung for Trump in 2016. Trump won here by 20 points – a huge margin – which helped secure his victory in Pennsylvania.

Today, Trump-Pence yard signs and flags abound in the area, which has its county seat in Wilkes-Barre, a working class town.

Corey Camasso, a Trump supporter who runs a conservative podcast, says that, like many locals, he was originally a Democrat, but began to vote Republican in recent years. He believes the enthusiasm for Trump is unabated.

“This county is converting,” he says, noting the high number of people who are registering as Republicans in the area. “I think the ambition and the drive behind the supporters of Donald Trump is almost double than what I saw in 2016,” he says. “He delivered, whether in terms of immigration or the economy,” he says, noting Trump’s move to renegotiate Nafta – the much-maligned North American Free Trade Agreement that many link to the demise of American industry in the rust-belt states.

But whether the strong support for Trump on evidence in Luzerne County is enough to keep Pennsylvania in the Republican column this time around is debatable.

Democrats have performed very strongly in the state in elections since Trump’s victory. Newcomer Conor Lamb won a special election race in the southwest of the state in 2018, while Democrats picked up several House of Representative seats in the mid-term elections.

The Biden campaign is hoping that strong turnout in the suburbs of Philadelphia and Pittsburgh will help swing Pennsylvania back to Democrats.

Kristin Kanthak, associate professor of political science at the University of Pittsburgh, says Pennsylvania’s urban/rural divide is one of the reasons it typically attracts a lot of interest as a battleground state.

“The US is seeing an urban/rural divide politically that we haven’t seen in a long time. In that sense, Pennsylvania is a microcosm of the United States, ” she says, noting that the state is built around the two big cities of Philadelphia and Pittsburgh, with rural counties in between.

Two sets of polls this week show that Biden is well ahead of Trump in Pennsylvania. A Washington Post-ABC poll put Biden with a nine percentage point edge over the incumbent. While much of this reflected support is in the east of the state around Philadelphia, the poll also showed Biden competing with Trump in the western part of Pennsylvania, suggesting he is making inroads with white, working class voters.

But as Prof Kanthak notes, one important factor will be turnout. Trump won Pennsylvania by small margins in 2016. “That’s why we’re seeing both candidates focus on trying to energise their supporters and encourage turnout,” she says. “A few thousand votes can make the difference of who wins here.”