Covid-19: Mounting criticism in England of 10pm curfew for bars and restaurants 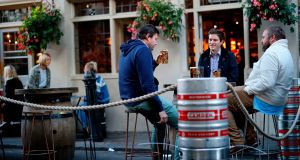 Britain has tightened restrictions to stem a surge of coronavirus cases, ordering pubs to close early and advising people to go back to working from home to prevent a second national lockdown. File photograph: Getty

Local coronavirus restrictions will come into force in four more parts of England on Saturday amid growing criticism of a nationwide 10pm curfew for bars and restaurants.

More than two million people in Merseyside, Warrington, Hartlepool and Middlesbrough will be forbidden from mixing with people from other households in any indoor setting.

Health secretary Matt Hancock pointed to a survey by Imperial College London that suggests that the growth rate of the pandemic has started to slow down since new social distancing measures were introduced last month.

“I understand how much of an imposition this is. I want rules like this to stay in place for as short a time as possible, I’m sure we all do. The study published today shows us hope that together we can crack this and the more people follow the rules and reduce their social contact, the quicker we can get Liverpool and the northeast back on their feet,” he said.

The Imperial College survey is based on swab tests on a random sample of 84,000 people between September 18th and 26th. It suggests that the R number fell from 1.7 early in the month to 1.1, although there was a wide margin of error.

Andy Preston, the independent, directly elected mayor of Middlesbrough, said he would not accept the restrictions imposed on his town.

“We need to talk to government, they need to understand our local knowledge, expertise and ability to get things done, and preserve jobs and wellbeing. We are really disappointed. As things stand we defy the government and we do not accept these measures. We need to get Covid under control and we need to work with people to find a way of preserving jobs and mental health.”

Labour leader Keir Starmer became the latest politician to join a call from Manchester mayor Andy Burnham for the government to rethink its 10pm curfew for bars and restaurants. Mr Burnham said it was not clear the rule was working as it was intended.

“He has pointed, understandably, to lots of people coming out of venues at the same time,” said Sir Keir.

“I suggest it might be a good idea for the government to reflect on what Andy Burnham is saying and ask themselves the question whether that should stay in place.”

Mr Hancock defended the 10pm curfew in the House of Commons on Thursday, citing evidence that people are less likely to observe social distancing the longer they have been drinking. But Conservative MP Philip Davies complained about the damage the curfew was causing to pubs and restaurants.

“Is he aware of the jobs that are being lost, all just to see people congregating on the streets instead and shop staff getting more abuse? When will the secretary of state start acting like a Conservative with a belief in individual responsibility and abandon this arbitrary nanny-state socialist approach, which is serving no purpose at all, apart from to further collapse the economy and erode our freedoms?” he said.