US-China tensions ramp up as Trump issues ultimatum to WHO 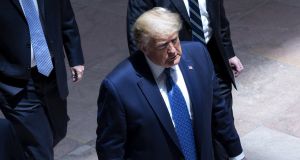 Tensions between China and the United States have escalated further after president Donald Trump warned the World Health Organisation (WHO) that it should “demonstrate independence from China” or face US withdrawal from the global body.

In a letter publicly released by the president, Mr Trump said he may have to “reconsider” US membership of the agency if it does not “commit to major substantive improvements” within the next 20 days.

“The only way forward for the World Health Organization is if it can actually demonstrate independence from China,” he wrote in the letter addressed to WHO director Tedros Adhanom Ghebreyesus.

Accusing the organisation of “repeated missteps”, he said that the WHO had resisted issuing an emergency declaration under pressure from Chinese leader Xi Jinping.

“I cannot allow American taxpayer dollars to continue to finance an organization that, in its present state, is so clearly not serving America’s interests,” he wrote.

But Beijing hit back at the intervention. Chinese foreign ministry spokesman Zhao Lijian accused Mr Trump of trying to smear China, mislead the public and “shift the blame for [the US’s] own incompetent response”.

The European Union also defended the UN body. “This is the time for solidarity, not the time for finger-pointing or for undermining multilateral co-operation,” a spokeswoman said.

Mr Trump already suspended funding to the organisation for 60 days last month, but the latest intervention would make that suspension permanent.

The WHO has agreed to set up an independent inquiry into the global response to the pandemic.

The resolution was approved without objection by the WHO’s 194-member annual assembly meeting virtually in Geneva.

On Monday, US health secretary Alex Azar used his virtual address to the UN body to chastise the WHO for allowing the pandemic to “spin out of control”.

“There was a failure by this organisation to obtain the information that the world needed,” he said. “In an apparent attempt to conceal this outbreak, at least one member state made a mockery of their transparency obligations, with tremendous costs for the entire world,” he added, in apparent reference to China.

Asked at a White House event on Tuesday on why he had sent the letter to the WHO, Mr Trump replied:

“They have to clean up their act, they have to do a better job, they have to be much more fair to other countries including the United States or else we’re not going to be involved with them any more. We’ll do it a separate way.”

The US president also hit out at China as he hosted an event for farmers at the White House. Announcing a new $19 billion (€17 billion) package for the agriculture and food sector, Mr Trump said that US farmers had been targeted by China when his administration had started “negotiating tough” with Beijing over trade tariffs.

The Trump administration has been forced to give farmers billions of dollars in subsidies as international demand for their produce was hit by the US-China trade war.

Outlining the aid he has given farmers, he said: “No other president has done this. You can go back to Abraham Lincoln. There’s no president who has treated the farmers like Trump. Who wouldn’t be with Trump?”

Mr Trump also made a rare visit to Capitol Hill on Tuesday for discussions with Senate Republicans about further stimulus for the US economy. The Democratic-controlled House of Representatives passed a $3 trillion package, but it has been opposed by the Republican-controlled Senate and the Trump White House.

Treasury secretary Steve Mnuchin warned that the US economy risks “permanent damage” if states delay reopening in the wake of the coronavirus pandemic as he addressed a virtual meeting of the Senate banking committee on Tuesday.

Most US states are beginning to reopen, despite the ongoing threat from the virus, which has taken the lives of approximately 90,000 Americans.