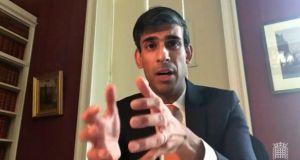 Rishi Sunak: “There still will be restrictions on how people can shop, which will have an impact on how much they spend and how many people go out.” Photograph: PRU/AFP via Getty Images

Britain abandoned testing and contact tracing in the community last March because of a lack of capacity, one of the government’s top scientific advisers has acknowledged. Angela McLean, chief scientific adviser to the ministry of defence, told a Downing Street press conference that the decision was the best available at the time.

“At the time, with the testing we had, the right thing to do was to focus it on people who were really sick in hospital so we knew who in hospital had Covid,” she said.

Dame Angela was speaking as Britain’s official death toll from coronavirus reached 35,341, an increase of 545 since Monday. Figures from the Office for National Statistics (ONS) published on Tuesday showed that the actual number of deaths from the virus is at least 44,000 and the number of “excess deaths” in Britain between the middle of March and May 8th was 54,449.

Criticism of Britain’s handling of the epidemic has focused on its delay in moving into lockdown and the decision to abandon community testing and tracing in March. Dame Angela said that “scientific advice would be that you need to have a rapid and reliable testing system”, adding that the system was now “getting better”.

“You can only make judgments and decisions based on the information and advice that you have at the time,” she told Sky News. “If the science was wrong, advice at the time was wrong, I’m not surprised if people will then think we then made a wrong decision.”

Chancellor of the exchequer Rishi Sunak told a House of Lords committee that he hoped that the economy would recover quickly as restrictions are eased over the coming weeks but that the experience elsewhere in Europe suggested otherwise.

“It is not obvious that there will be an immediate bounce back, it takes time for people to get back to the habits that they had. There are still restrictions in place even if we can reopen retail, which we’d very much like to be able to do and on June 1st. There still will be restrictions on how people can shop, which will have an impact on how much they spend and how many people go out. Those things will all take time,” he said.

The government has promised to publish a plan for quarantining visitors to the country for 14 days but Labour’s shadow security minister Conor McGinn said it must provide clarity about how it would affect travellers from Ireland.

“The ability to move freely in the Common Travel Area only applies to British and Irish citizens, but the government has suggested that all travel in to the UK from Ireland should be exempt from quarantine, potentially including those coming from other countries,” he said.

“In recent days the Irish Government has rebuffed UK ministers by making it clear that anyone arriving from outside the island of Ireland, including British citizens, will be subject to 14-day quarantine rules. In addition, the Channel Islands and the Isle of Man are only allowing very limited inbound travel and quarantining all arrivals. Ministers need to clear up this confusion and work with Common Travel Area partners to ensure the UK is not out-of-step or taking unnecessary risks.”