Greece Letter: If tourists come, Covid-19 may spread. If they don’t, the economy faces ruin 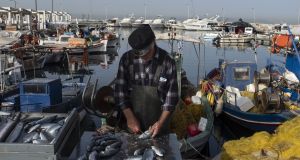 A fisherman works at a marina in Glyfada, near Athens. Tourism contributes 20 per cent of Greece’s GDP. Photograph: Yorgos Karahalis/Bloomberg

Louise Stephens of the Abbey Theatre (as reported here on April 25th) asks if the Greeks have a word for “the longing you have for someone when you know there’s a barrier in the way”. Well, the immediate answer is “nostalgia” – which in Greek means the pain (algos) of the homeward journey (nostos). And yes, there is a verb, “nostalgo”, meaning exactly “I yearn”, for something which we know will be painful, if not impossible, to reach.

Nothing could have been more true of Greek Easter this year. Easter is not only the high point on the spiritual calendar, but an occasion of reunion for family far and wide. The impossibility of the “nostos” caused real emotional pain. The restrictions on movement, between prefectures and from the mainland to the islands, together with the closure of the churches, meant that Easter was, in effect, a non-event, leaving a “yearning hole” at the heart of Greek social life.

Where I live, in Corfu, the religious processions on Good Friday and Easter Sunday are central to people’s year-round lives, accompanied by the philharmonic bands, with sombre, funereal music – Albinoni’s Adagio and the funeral music from Franco Faccio’s opera Hamlet. This year, they found a spectacular solution: each band member, wearing headphones, played in his or her own home, using their mobile phones as cameras. The whole concert was mixed, edited and broadcast on local television, thus enabling all citizens to participate, however distantly, in the Easter vigil.

Greece is rated as the “success story” of the EU – so far at least. With a population more than twice the size of Ireland’s, there had been 165 deaths by mid-May, and approximately 2,800 infections, compared with Ireland’s 24,000-plus infections and 1,500-plus deaths. This is remarkable, considering that almost half of all Greeks live in cities or large towns. In Corfu we have been relatively lucky, with only two deaths and four other infections, due mainly to the isolation of the island.

The possibility of infection from incoming visitors raises the question of virus-testing and “health passports”: how can the immigration authorities be sure that they are valid and accurate?

On April 28th, PM Kyriakos Mitsotakis addressed the nation with a script any spin-doctor would be proud to have written. “We, as a society, have accepted the need to paralyse economic activity to save human lives. We stayed away from people we love, to protect them.”

Restrictions are being lifted gradually, but only if the statistics continue to support it. Last week, schools and small shops reopened, and, from May 25th, cafes and tavernas which have outdoor seating. Hotels cannot open until they can satisfy health standards.

Anxiety is now concentrated on the reopening of the country to tourism. This is Greece’s core industry. The 20 per cent it contributes to GDP is growing year-on-year as other industries contract, while at peak season almost every child and granny is recruited to keep the local tavernas in business, hugely augmenting the basic 20 per cent of the national workforce.

Greece has already lost more than half its annual revenue from tourism: not only exchequer income but workers’ wages and the hospitality industry at large. If the rest of the season is not saved, the entire Greek economy could be in a worse situation that in the economic collapse of 2010.

While negotiations are continuing between Greece and the EU, and unilaterally with other states such as Israel, there is as yet no clear-cut policy or set of guidelines on the viability of open or even controlled access to the tourist market. Visitors, even with negative tests, are still required to self-quarantine.

The Greek government is between a rock and a hard place – or, to be more Greek, between Scylla and Charybdis. International flights are expected to resume at the end of June. The possibility of infection from incoming visitors raises the question of virus-testing and “health passports”: how can the immigration authorities be sure that they are valid and accurate?

In Corfu, almost 80 per cent of the whole population is involved in tourism, which means that this year, with the prospect of an almost total collapse in business, many will lose their entire annual income and hundreds of cafes and shops will never reopen. Corfu, Crete and Rhodes, all relatively virus-free, have been designated as likely tourist destinations. If they come, we fear the health consequences. If they don’t, we fear the economic fall-out.

As a young cafe-owner in the village where I live said philosophically, “Twenty years ago we had no money. Now we know what it is like to be rich, and we can’t get used to the idea of going back to poverty.” But Greeks invented both pragmatism and stoicism, and resilience is the only show in town.

Mitsotakis said “The individual attitude became a collective success”. He was absolutely right: above all, Covid-19 has created a new Greek paradox: that by selfishly ensuring one’s self-preservation, one also contributes to the greater good.