‘Ramadan offensive’ by Islamic State in Syria and Iraq 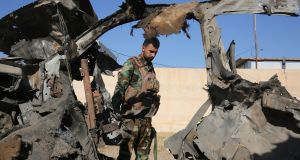 Islamic State attacks have surged in a “Ramadan offensive” in Syria and Iraq as these war-ravaged countries struggle to contain the coronavirus and economic crises.

United Nations human rights commissioner Michelle Bachelet has warned the situation in Syria is a “ticking time-bomb that must not be ignored”.

“We are receiving more reports every day of targeted killings and bombings from one end of the country to the other, with many such attacks taking place in populated areas,” she said.

The circumstances she describes are also true of Iraq. While combatants make up the vast majority of victims in both countries, rising numbers of civilians are being killed.

In Syria 521 pro-government forces and 182 members of Islamic State have been killed in attacks since late March, according to the Britain-based opposition Syrian Observatory for Human Rights.

Islamic State has been joined by rival al-Qaeda-linked jihadi groups based in northwestern Idlib province. Although Idlib has been declared a ceasefire and de-confliction zone where Turkey has agreed to curb radical factions, the terror groups continue to strike Syrian troops and civilians outside Idlib. Such attacks elicit retaliation from the Syrian army and allied Russian air force.

In Iraq, Islamic State is the chief perpetrator of violence. Dozens of army troops, fighters from Popular Mobilisation Units, and security personnel have died in Islamic State operations during the Muslim fasting month of Ramadan which began on April 23rd and is meant to be a period of truce and peace-making.

Since the movement’s defeat in March 2019, Islamic State remnants have taken refuge in the rugged mountains of eastern Iraq and vast deserts of eastern Syria, regrouped, and revived. Covid-19 has enabled them to exploit the vulnerabilities of these countries.

Lacking financial means to provide testing, tracing, and treatment facilities to prevent or contain mass contagion, the Baghdad and Damascus authorities have relied on physical impositions to protect their populations.

While troops and security forces have been occupied in ensuring isolation and lockdown in urban areas, fewer checkpoints and empty roads in rural areas have given Islamic State fighters freedom of movement to mount operations.

Hit-and-run strikes by commando squads and suicide bombings were mainstays of the jihadi modus operandi before Islamic State founded its cross-border “caliphate” in 2014.

Embittered by its eradication and the loss of vast tracts of territory in Syria and Iraq and emboldened by rejection by their homelands, Arab and foreign jihadis ambush military convoys and patrols, assassinate officials and officers, seize villages, set fire to fields, hijack oil tankers to obtain fuel for vehicles, and plant mines and improvised explosive devices on roads and highways.