As the cathedral in Chartres reopens, sacred and profane struggle with Covid-19 constraints 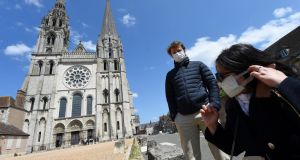 Two worshippers, Guillaume and Cynthia, put on their as they prepare to enter the reopened Notre Dame de Chartres cathedral in central France on May 14th. Photograph: Jean-François Monier/AFP via Getty Images

The French poet Charles Péguy described Our Lady of Chartres as a star of the sea, rising above oceans of wheatfields on the plains of La Beauce.

It is more prosaic to approach the Gothic masterpiece from the autoroute, but its majesty is nonetheless stunning.

I visited Chartres because it falls within the 100km “perimeter of liberty” accessible to Parisians under Covid-19 regulations.

The cathedral’s website announced that it would reopen to visitors on the afternoon of May 14th. They would be required to wear masks. Fifty could enter at a time, if they observed social distancing.

The rules changed overnight. The prefecture, the arm of the interior ministry which is responsible for religious affairs, grew alarmed at the prospect of Parisians flocking to the beauty spot 86km to the southwest of the capital.

“This is the contradiction we’ve been living with since the beginning of the epidemic,” Fr Emmanuel Blondeau (56), the rector and parish priest, said. “The state says: ‘Stay at home but go to work. We’re lifting the lockdown but don’t move. Don’t go to Chartres, which is the most beautiful town in France.’”

They don’t understand what Mass means to Christians. They think it doesn’t matter, but it matters to us

Instead of 50 people, only 10 visitors are allowed to enter the sanctuary at a time.

“The cathedral is open only for personal prayer, and for residents of Chartres,” a staff member admonishes visitors in the queue. Some drift away dejectedly. A flacon of hand sanitiser and an offering plate await those who persevere.  Under lockdown, “There has been an explosion of digital life in the parish,” Fr Blondeau says. “Things we never imagined. We didn’t even have a newsletter. We’d never had a televised Mass before. We created a YouTube channel.”

The cathedral has broadcast Mass live every Sunday since mid-March. In normal times, up to 1,500 attend services. Now 2,000 click on the parish website, and several are presumably watching in many households. The videos are also available on demand from France’s main telecoms operators.

Fr Blondeau estimates up to 20,000 people are watching, and he’s thrilled by the surge in his ratings. “Eighty people used to attend morning Mass on weekdays. From the feedback I get, I think about 1,000 listen on radio.”

But relations between church and state have hit a low point. When prime minister Édouard Philippe announced the partial lifting of the lockdown, he banned religious ceremonies at least until June 2nd.

“They don’t understand what Mass means to Christians,” Fr Blondeau says. “They think it doesn’t matter, but it matters to us. Parishioners are deeply wounded by the lack of freedom. They feel disrespected.”

Fr Blondeau could understand, as long as the entire population was isolated. Since May 11th, he says, there has been discrimination against believers. The rules imposed on the cathedral seem disproportionate, especially when one considers the crowds in French supermarkets.

On the evening of May 18th, the Council of State, France’s highest administrative jurisdiction, ruled that the ban on religious ceremonies constitutes “a serious and obviously illegal” attack on religious freedom. It ordered the government to lift the ban within eight days.

“I’m eager to say Mass in front of people with faces, instead of empty chairs,” Fr Blondeau says. The Conference of Bishops and the leaders of the Jewish, Muslim and Protestant faiths are now negotiating conditions for resuming religious services.

It will be too late for Ascension Day on Thursday. But Fr Blondeau thinks 30 per cent occupancy, or 500 worshippers in Chartres cathedral, would be a reasonable figure. He hopes to hold normal services for the Feast of the Pentecost on May 31st.

Patrick Delabre, the cathedral’s organist, will play for the Ascension and Pentecost Masses, whether they are televised or attended by the faithful.

Though he is isolated in the 10-metre by 12-metre organ loft, Delabre (67) thought it wise to stay home from mid-March. He feared catching Covid-19, or spreading the virus.

“If I weren’t a believer I couldn’t do this job,” Delabre says. “There’s a commitment to the flow of the liturgy, a receptiveness. You have to feel it.”

Delabre and his wife, also an organist, practised for up to five hours a day on their home keyboards during the lockdown. “I was able to channel my anxiety,” he says. “You forget the outside world. You are alone with yourself. I improvised a lot during this period.”

Delabre doesn’t know yet what music he will play for the feast days. “Things have been so morbid. I think people will want something luminous,” he says.

Since he is a believer, I ask Delabre why does he think God allowed the pandemic to happen. “He doesn’t have power over events,” the organist replies thoughtfully. “The existence of God is essentially about a personal relationship.”

To go from the sacred to the profane, one has only to cross the square in front of the cathedral, to the offices of Cosmetic Valley, the association of France’s 3,200 cosmetic and perfume-makers.

They are largely responsible for the economic revival of the town of 40,000. The move to the west of Paris was pioneered by the perfume heir Jean-Paul Guerlain, who wanted his factory to be near his country home at Rambouillet. Others followed.

Today, the €45 billion cosmetic and perfume industry – the country’s second-largest – is concentrated in a crescent running from Normandy through Chartres and down to Tours.

I was in town this morning. Most people wear masks. But the 18- to 20-year-olds aren’t responsible

When perfume and cosmetic factories ran short of ethanol, they turned to French champagne and cognac makers.

Despite their inventiveness, the cosmetic and perfume manufacturers lost two months of exports to Asia, mainly China, their biggest market. And though none shut down completely, plants slowed production throughout the lockdown. Cosmetic Valley will hold a “states-general” for 500 executives from the industry in an auditorium at the Louvre in October, to consider the way forward.

A few miles away, Nelly Moreau (67) serves customers in the Pharmacie de la Cité. A businesswoman who is active in the local Rotary club, Moreau has worked in the mostly Arab and African banlieue for 30 years. There was rioting in 2005. One of the killers in the 2015 Bataclan massacre was an Arab youth from a similar neighbourhood in Chartres.

Moreau, like the majority of the people I talk to, fears the government may reimpose the lockdown if there is a second wave of infections.

“I was in town this morning,” she says. “Most people wear masks. But the 18- to 20-year-olds aren’t responsible. They didn’t see each other for months and now they want to celebrate. They’re all meeting on the Place des Épars.”

When I drove past the square, I saw youths skateboarding and sitting on crowded benches.

“Our generation is more reasonable,” Moreau sighs. Yet she has compassion for the young, living under the threat of disease and economic disaster.

“Our generation was really lucky,” Moreau reflects. “We never knew invasion and occupation. We had 30 years of prosperity. We had an extraordinary life, and we didn’t even know it.”