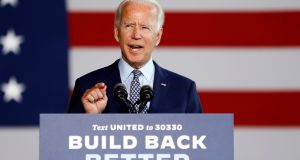 Presumptive Democratic presidential nominee Joe Biden promised on Thursday to spend $700 billion on American-made products and industrial research, which he said would give an estimated 5 million more people a pay cheque during a job-killing pandemic.

“I’ll be laser-focused on working families: the middle-class families I came from here in Scranton, not the wealthy investor class,” Mr Biden said in a speech outlining the plan near his childhood hometown in northeastern Pennsylvania. “They don’t need me, but working families do.”

The proposals added more specifics – and a bigger price tag – to trillions in economic recovery policies the former vice president has promised if he defeats Republican president Donald Trump in the election on November 3rd.

The US economy is reeling from on-and-off coronavirus shutdowns, with a record 32.9 million people collecting unemployment cheques in the third week of June, Labor Department data showed on Thursday.

Republican vice-president Mike Pence also toured Pennsylvania on Thursday, telling a business roundtable in the Philadelphia suburb of Malvern that “even in the midst of outbreaks that we’re seeing in Sunbelt states, we are opening up America again.”

Mr Trump carried the state in 2016 by a slim margin, the first Republican to do so since 1988, helping elevate him to the White House.

“Biden’s willful attack on our jobs, our families, and the American way of life will reverse all the gains we’ve made together and plunge us into economic catastrophe,” Trump campaign spokesman Hogan Gidley said in a statement.

Both Mr Biden and Mr Pence were visiting areas that have grown less hospitable to their parties in the Trump era.

Mr Biden spent the day in Lackawanna County, a long-time Democratic stronghold that like many blue-collar parts of Pennsylvania has swung hard toward Mr Trump.

Chester County, where Mr Pence travelled, is one of several counties near Philadelphia that have seen Democratic gains since 2016, matching the trend in suburbs across the country. – Reuters