Iran signs accord with Syria to fight ‘terrorism’ 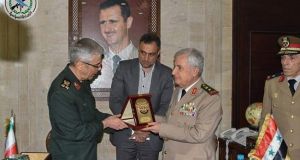 Iran is stepping up efforts to maintain influence in the Middle East after a series of explosions and fires at strategic and other sites that it blames on US or Israeli sabotage. It is also angry over tightening US sanctions.

Iran has signed a bilateral military agreement with Syria to fight “terrorism”, counter US pressure and boost Syria’s air defences.

Syrian defence minister Ali Ayoub stressed that Syria and Iran, allies since 1980, are determined to overcome “the new chapter of open war”. They also demand the “withdrawal of all foreign forces having entered Syria illegally”, without specifying those from the US and Turkey as well as jihadis from dozens of countries.

Since war erupted in Syria in 2011, Tehran has deployed both military advisers and pro-Iranian militiamen in Syria to fight insurgents and jihadis seeking to oust the government, provided Syria with oil and economic aid in violation of US sanctions, and strengthened Syria’s defences against scores of air attacks mounted on military targets by Israel.

Tehran’s political and paramilitary allies in Iraq have pushed back against prime minister Mustafa al-Kadhimi’s efforts to curb pro-Iranian militias, which have mounted rocket strikes on US bases and the US embassy.

While Kadhimi has called for dialogue between Iran and the US, the militias demand the expulsion of US troops ahead of talks. Trying to navigate between the sparring rivals, Kadhimi has to take into account that pro-Iranian politicians dominate parliament and that Iran is Iraq’s largest trading partner, providing electricity, refined petroleum products, food and other essential goods and services.

As citizens of Lebanon face up to 20 hours of power cuts daily, Hizbullah leader Sayyed Hassan Nasrallah revealed that the Iran-allied movement is discussing with Tehran the prospect of supplying refined oil in exchange for Lebanese pounds.

This would be a losing proposition for Iran as the pound has lost 80 per cent of its value in recent months and continues to slide against the dollar. He accused the US of preventing dollars from reaching the country and of obstructing investment.

US secretary of state Mike Pompeo replied by saying the US would back Lebanon as long as it imposed reforms and was “not subordinate to Iran”. He said the US was “trying hard to prevent Iran from selling crude to Hizbullah”.

Although it brands Hizbullah a terrorist organisation, the US has freed Lebanese businessman Kassim Tajideen, who was imprisoned for laundering money for Hizbullah.

He was reportedly exchanged for dual US-Lebanese citizen Amer Fakhoury, commandant of the notorious Khiam prison, where Israeli-backed Lebanese surrogates held, tortured and killed opponents of Israel’s 1978-2000 occupation of the south.