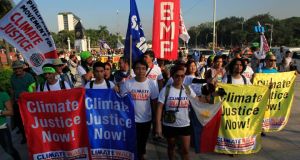 Environmental advocates participate in the “People’s Walk for Climate Justice”, a walkathon against climate change in the Philippines. The latest round of UN climate talks are set to “grind to a halt” unless its joint co-chairs find a way of reconciling serious differences between rich and poor countries. Photograph: Romeo Ranoco/Reuters

The latest round of UN climate talks “will grind to a halt” unless its joint co-chairs find a way of reconciling serious differences between rich and poor countries over the scope of pledges to tackle global warming.

Developing countries are demanding that these pledges – known as “intended nationally determined contributions”, or INDCs – must include substantial funding to enable poorer nations to adapt to the effects of climate change.

“This has become the big sticking point in Bonn,” said John Lanchbery of Birdlife International, a veteran observer of the often-tortuous climate negotiations. “They’ve got to fix it, otherwise everything will grind to a halt.”

Developed countries, including EU member states, had understood that INDCs would be limited to mitigation – cutting greenhouse gas emissions, in other words – but poorer nations want adaptation to have “political parity”.

Peruvian environment minister Manuel Pulgar-Vidal, who will preside at December’s UN climate summit in Lima, reminded delegates that it was just 40 days away, saying the world would not accept “our failure to fulfil the mandate” to reach a deal.

Chairman of the 48-strong Least Developed Countries group, Nepal’s Prakash Mathema, warned the number of negotiation days before the end of 2015 was “quickly dwindling, and missing the deadline is not an option”.

The legal form of the final agreement due to be concluded in Paris at the end of next year has still not been determined, however. Delegates were told that the options were a protocol, another legal instrument, or an “agreed outcome with legal force”.

Nauru, representing the highly-vulnerable Alliance of Small Island States, said it was “absolutely critical” that some compensation mechanism for loss and damage due to climate change would be a “central element” of the 2015 deal.

Speaking for the G77 group of developing countries, Bolivia pressed for negotiations to start.

G77, which now includes 130 developing nations as well as China, is pressing for a “clear commitment” by richer countries to provide at least $70 billion per year in aid by 2016, rising to $100 billion per year by 2020 as a “floor for accounting”.