Tuning in to the US midterm elections? What to watch for and when

State of play, when to watch, and key battles for Tuesday’s crucial Congress vote 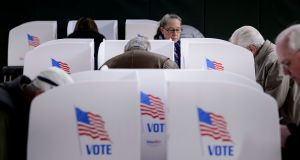 People cast their ballots at a community centre during early voting for the US midterm elections in Potomac, Maryland on October 25th. Photograph: Brendan Smialowski/AFP/Getty Images

The midterm elections to decide on the make-up of Congress take place across the United States on Tuesday, with all 435 seats in the House of Representatives up for grabs and 35 of the Senate’s 100 seats. In addition, 36 state governors will be elected as well as various state legislature roles.

Most polls in the eastern part of the United States close at 7pm on Tuesday (midnight Irish time) and results will start to come in soon afterwards.With the mainland US spanning four time zones, results continue to arrive throughout the night – though in some key races a final result could be weeks away.

Right now the Republicans have control of both houses of Congress, which is a huge help to President Donald Trump’s agenda. Democrats need a net gain of 23 seats in the House of Representatives to turn it blue, and polls suggest they are on track to do so.

Republicans currently hold just a one-seat advantage in the Senate – 51-49 – but Democrats will struggle to improve their lot. Of the 35 seats being voted on, 26 are currently held by Democrats and just nine are held by Republicans. In addition, 10 of those Democratic seats are held in states that voted for Trump in 2016. So Democrats face a formidable task to hold on to all of their Senate seats and add another two.

Why do the midterms matter?

With a Senate majority, the Democrats would be able to block cabinet and supreme court appointments. With a House majority, Democrats can undermine the Trump administration’s ability to implement its agenda and could also begin impeachment proceedings against Trump, though a two-thirds Senate majority is needed to remove him from office. The 36 governor races are also important. Governors – as well as state legislatures – play a key role in how election districts are drawn in many states, a contentious issue in the United States.

Indiana is one of the few states to close some of its polls at 6pm (11pm Irish time), which means it could be the first state to declare. It also has one of the most interesting Senate races. Incumbent Democratic senator Joe Donnelly is fighting for his seat and is facing a strong challenge from Republican contender Mike Braun. While some of the state is in the central time zone and will report later, that district is reliably Democrat and unlikely to produce any shock results.

All eyes will be on Atlanta as Stacey Abrams bids to become the first African-American female governor in US history. Polls are tight, and the race could eventually end in a run-off on December 4th if neither Abrams nor her Republican rival Brian Kemp gain 50 per cent of the vote. The House districts six and seven may also be toss-ups. Like many other states, early voting in Georgia has been high – more than 2.1 million people will have cast their vote before November 6th.

Donald Trump won the Appalachian state by 29.8 points in 2016, but this seemingly reliably Republican state could yield some ground for Democrats. The party was buoyed by the results of a special election earlier this year which saw a Democrat, Linda Belcher, win back her seat from a Republican in a district which voted for Trump by 72 per cent. This time, all eyes are on Kentucky’s sixth congressional district where former marine pilot Amy McGrath is giving current representative Andy Barr a run for his money.

The Sunshine State is expecting tight races at all levels. Current governor Rick Scott is taking on three-term incumbent Democrat Bill Nelson for his Senate race. There are several tight House seats in the state, including the sixth and fifth congressional districts. The state’s gubernatorial race is also attracting national attention, with current mayor of Tallahassee Andrew Gillum neck and neck with Trump acolyte and former congressman Ron deSantis. With a small portion of the state in central time zone, a full picture from Florida won’t emerge until some time later.

Results here may give a good indication of the political direction of the all-important moderate suburban vote. Although Democrat-leaning, New Jersey has several Republican-held congressional seats that Democrats are hoping to poach. Keep an eye out for Robert Menendez. The veteran Democrat senator and former chair of the Senate foreign relations committee could be in for a tough battle after an anti-corruption case against him last year ended in a mistrial.

The state that went for Trump in 2016, securing his path to the White House, will be one of the earliest to report. Democrats are hoping to pick up several House seats here, in particular because of a redistricting decision that will benefit the party. While Pennsylvania currently has no women in Congress, the party is hoping to change that and is running several women candidates.

All eyes are on the Senate race here. Republican Marsha Blackburn is hoping to maintain the Republican Senate seat being vacated by retiring senator Bob Corker, a critic of Trump. But the popular Democratic governor Phil Bredesen is polling well, prompting Democratic hopes that this could be a pick-up seat. Like Kentucky, the first results will start coming in from Tennessee after 8pm eastern time (1 am Irish time)

Here Democrats are hoping to pick up the Senate seat currently held by Jeff Flake. Martha McSally, a Trump ally, is competing against Democratic congresswoman Krysten Sinema. The state’s second congressional district, located in the greater Tucson area, is also expected to be tight as Democrat Ann Fitzpatrick takes on Lea Marquez Peterson. It is one of 25 Republican-held districts won by Hillary Clinton in 2016.

Incumbent Dean Heller is seen as one of Republicans’ most vulnerable senators. Though traditionally a Republican-leaning state, Nevada has become increasingly diverse and narrowly voted for Hillary Clinton in 2016. Democratic candidate Jacky Rosen is in with a strong chance.

While Democrat victory is assured in the Senate and gubernatorial races, up to 13 House races could be competitive in California. Democrats are hoping that California could play a key role in helping them flip the total of 23 seats they need to regain control of the House of Representatives.

Among the swing seats are Orange County’s 49th congressional distrct, and the 22nd congressional district in Central Valley, a seat currently held by House intelligence committee chair Devin Nunes, a strong Trump ally. California could be the last state to declare – the state accepts postal votes as long as they are posted by election day. A full picture may not be known until December 7th, the date by which election officials must verify the results.