Gary Hart: ‘I bear a very heavy burden of responsibility’ 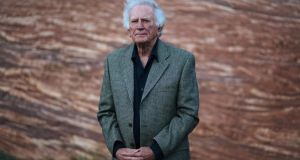 As we fantasise about a parallel universe, where America is not a joke and our president cares about other human beings, the same questions keep swirling in our heads. What has happened to this country? Can he be stopped? When will it end? How the hell did we get here?

At sunset in the red mountains outside Denver, a tall man with white hair, granite features, black jeans and black Lucchese cowboy boots thinks he knows that last answer.

While the rest of us obsess on what happened in 2016 and what will happen on Tuesday, Gary Hart is bedevilled by what happened in 1987, and whether the tabloid mania sparked by his liaison with Donna Rice led down a rattlesnake-filled path straight to our tabloid president.

Hart, and a new Jason Reitman movie about the Rice imbroglio, The Front Runner, both pose the question: is there a direct connection between Hart’s fall and Trump’s rise?

If reporters had not hidden in the bushes, would there have been any Bushes?

If Hart had won in 1988, would Dick Cheney have finished his career with a golden parachute at Halliburton instead of a dark plunge into deranged global domination? Would we have been spared from two wars against Saddam, September 11th, Islamic State and the climate catastrophe?

“I bear a very heavy burden of responsibility,” Hart says, picking at a “game plate” of elk, buffalo and quail at the Fort restaurant outside of Denver. “If all that stuff had not happened and if I had been elected, there would have been no gulf war. HW wouldn’t have been president. W wouldn’t have been president. Everything would have changed. I don’t say that to aggrandise myself. It’s just, history changed.

“And that has haunted me for 30 years. I had only one talent and it wasn’t traditional politics – I could see farther ahead than anybody.”

You could dismiss this as “sans moi, le deluge” grandiosity. But, whatever his flaws, the former senator from Colorado was a political Nostradamus. He foresaw the rise of Silicon Valley and the demise of Detroit. Known as “an Atari Democrat,” he lunched in LA with Steve Jobs and Steve Wozniak in 1983.

As early as the 1970s, he recalled, “a few of us were forecasting that globalisation and the shift of the economic base from Detroit to Silicon Valley was going to have huge impact on our country sociologically and politically”.

He oversaw a bipartisan panel on threats facing the nation that delivered its final report on January 31st, 2001. “The first finding was America will be attacked by terrorists using weapons of mass destruction and Americans will die on American soil, possibly in large numbers,” he said. “We saw Colin Powell. We saw Rumsfeld. We saw Condi Rice.” He said he warned Rice at the White House again on September 6th, 2001. “Guess who didn’t listen? George W Bush and Dick Cheney. Always keep one thing in mind: 9/11 could have been prevented.”

Hart is 81 now, which is a jolt when you see him, because he hasn’t been in the public eye much in the decades since that totemic image of Rice smiling on his lap on a pier in Bimini, while he was wearing a Monkey Business crew T-shirt. He rejected the skeezy redemption offered by the scandal food chain. In his 2010 memoir, the only Rice in the index is Condoleezza.

Before Hart, we had FDR, LBJ and JFK, who did not suffer politically for dalliances because the mostly male press corps had a bro-code and a blind eye.

After Hart, Bill Clinton and Donald Trump got through frenzies about sexual transgressions by enduring the ridicule, enlisting their wives to defend them on TV, and attacking their accusers.

But the scratchy Hart wasn’t made that way. The adultery story enhanced the sense that he was an enigma, a story line that developed when the press learned that he had changed his name from Hartpence and fudged his age by a year.

Hart ruefully recalled reporters having “a cool and aloof key” on their Radio Shack TRS-80 word processors. When Hugh Jackman, who plays the candidate in the movie, gave interviews calling Hart enigmatic, Hart said to his son, John: “I’m not enigmatic, am I?” “Yep, you are,” John replied.

Hart haughtily withdrew from the race with a Jeffersonian echo: “I tremble for my country when I think we may, in fact, get the kind of leaders we deserve.” The Front Runner, featuring Vera Farmiga as the traumatised Lee Hart, uses that speech to imply that the leader we deserve, for being so squeamish about Hart, is Trump.

Hart maintained that “there was no relationship” with Rice. Rice – who became an evangelical and supports Trump – told People this week: “I’m just not discussing it.” But a married candidate can’t have a gorgeous young model fly up to DC from Miami for the weekend to visit his house – “the infamous townhouse,” as Hart’s son dryly calls it – and not attract questions if they are seen.

A recent piece by James Fallows in the Atlantic reported that Lee Atwater, the Republican dirty trickster and Poppy Bush party chief, confessed before his death that he had set up Hart for his weekend of doom on Monkey Business.

“That’s the only way that 48-hour period makes any sense,” Hart told me.

Even if it was casual recreation, the optics were bad and he – and his campaign – should have known it. Especially if the stakes for the world were as high as he says.

Shamelessness is now a superpower, as the twitterati say, and the audacious are rewarded. I wondered if Hart wished he had fought back.

“I’m not Donald Trump and I didn’t behave like Donald Trump,” he replied firmly. But he does refer to his hell week as “the witch hunt. I blame myself,” he said. He says he doesn’t blame the press, but I don’t believe him.

“I am still disturbed more by what happened after the original story – the condemnation in op-eds, in editorials, in opinion pages, by people who knew who I was but who just came down on me like a ton of bricks and wrote awful, vile things about me. The key word was character. ‘We had to do this because our job is to protect the American people from bad characters.’ It was all self-justification. There’s nothing wrong with my character.”

Hart said that, after the Rice story broke, Ben Bradlee had a Washington Post reporter give Hart a list of supposed inamoratas, warning that there would be a story unless Hart withdrew.

(Seven months later, he got back in the race and I covered him. But it was a forlorn campaign; he carried his own luggage – and Lee’s.)

“A list of names!” Hart said, the 30-year-old outrage fresh in his voice. “I mean, everybody knew Ben Bradlee and Jack Kennedy chased girls.”

“I didn’t hold myself out to be –” he said, trailing off. “Look, Lee and I were separated several times and I stayed at Bob Woodward’s house. Yes, I’m a famous Washington philanderer and when my wife and I separate, where do I go to do my philandering? Bob Woodward’s house? Gimme a break!”

(Back in 1987, the Washington Post did a story saying that Woodward and Hart aides were “disturbed that Hart had implied to reporters and others that he was staying at Woodward’s when more often he was staying with another woman”.)

In 1998, in the midst of the Clinton-Lewinsky uproar, Hart told me that he thought America might be getting more European about pols and sex, “growing up, finding out there is not a Santa Claus.”

I am not sure that’s true. We have not reached any consensus on the issue, except that most strategists know better than to publicly trash the women at the centre of such scandals.

In the Clinton years, some journalists wrote that we should separate “public character” from “private character” and acknowledge, as with the Founding Fathers, you could be a good leader even if your private life was questionable.

But last year, in the midst of the #Metoo reckoning, Senator Kirsten Gillibrand criticised Al Franken after he was accused of groping and faux-groping for a joke picture, and told the New York Times that Bill Clinton should have resigned over the Lewinsky matter.

Matt Bai, the Yahoo columnist who helped write the new Hart movie based on his book All the Truth is Out, posits that Hart’s exile “cost us something” as a nation.

But Bai thinks that each case must be “measured in some context,” and that the press should not abdicate its responsibility to judge. He thinks it was “damn relevant” for reporters from the National Enquirer to skulk around the Beverly Hilton and reveal that John Edwards had fathered a child with his mistress, while forcing an aide to say it was his.

Although Hart would like the media to have a serious discussion about what is and is not permitted, the culture has flown past that.

Nowadays, it wouldn’t be reporters in the bushes next to Hart’s Capitol Hill townhouse snapping pictures as the couple emerged, but passers-by on cellphones.

“There has been an explosion in social media that creates a minute-to-minute voracious appetite for things that will attract people’s attention,” David Axelrod told me. “And the explosion of money in politics weaponises negative stories.”

If Hart didn’t get to be president, he’s still prescient. I didn’t want to leave without asking what he thinks the next great threat will be.

“Cyber,” he shot back. “Could be banks. Could be transportation systems. Could be communications systems. It’s going to happen. If you want to find a secure place up here and take it off the grid, I can help you do that.” – New York Times service