Ukraine’s leaders under pressure as activist dies after acid attack 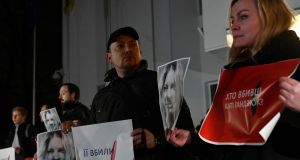 Ukraine’s leaders face domestic and international demands to protect its civil society and end the impunity of powerful criminals, following the death of activist Kateryna Handziuk from injuries suffered in an acid attack.

Ms Handziuk (33) died on Sunday, three months after someone poured sulphuric acid over her head outside her home in the southern city of Kherson, where she was an adviser to the mayor and campaigned against police and political corruption.

From her hospital bed in Kiev, she had called for urgent action over the assaults on more than 40 Ukrainian activists in the past year, and expressed doubts about whether five men arrested for the attack on her were actually involved in it.

There have also been more than 140 attacks on journalists in Ukraine since the start of 2017, and only 14 of those cases have gone to court, adding to a sense that police and officials are unable or unwilling to defend those who expose the lucrative links between politics, business, security and crime in Ukraine.

“We expect the Ukrainian authorities to redouble their efforts to quickly and thoroughly investigate this crime and bring those responsible to justice,” a spokesman for the European Commission said on Monday.

“Moreover, tangible steps are needed to prevent attacks against civil society activists and investigative journalists in Ukraine,” Ukrainian media quoted him as saying.

The US ambassador to Kiev, Marie Yovanovitch, urged Ukraine to “bring the perpetrators to justice, including those who ordered the attack [on Ms Handziuk]”.

Similar demands came from other western states that are helping Ukraine counter deep economic problems and Russian aggression, ramping up pressure on Kiev’s leaders ahead of presidential and parliamentary elections next year.

President Petro Poroshenko and his allies insist they are committed to fighting crime and corruption, but high-profile murders remain unsolved and no senior officials or businessmen have been jailed since the 2014 Maidan revolution, when Ukrainians rallied in huge numbers for a more equitable society.

While Mr Poroshenko and his government have made some economic reforms on pain of losing western cash, anti-corruption efforts are repeatedly stymied and activists and journalists face growing pressure from thugs and courts alike.

A group of reformist deputies in Ukraine’s parliament say they have been trying for almost a fortnight to have parliament create a temporary investigative committee to look into the recent violence against activists.

“The two biggest parliamentary groups – the Petro Poroshenko Bloc and People’s Front – which control all the security and law-enforcement agencies in the country, ignored the creation of the committee,” said deputy Mustafa Nayyem.

Dozens of civil society groups, meanwhile, jointly demanded the sacking of Kherson police chiefs for “sabotaging the investigation into the attack” on Ms Handziuk, as well as the resignation of Ukraine’s interior minister and prosecutor general for “sabotaging the reform of law-enforcement agencies in Ukraine”.