US midterm elections will be an endorsement or repudiation of Trump

The 2018 election cycle has been called “the year of the woman,” but Republican and Democratic female candidates have starkly different takes on what that means. Video: The New York Times 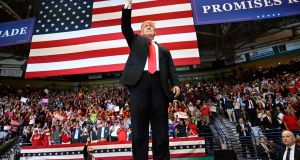 President Donald Trump during a rally in Estero, Florida, where he was campaigning for Republican governor Rick Scott, who is challenging incumbent Democratic senator Bill Nelson for a seat in the Senate. Photograph: AP Photo/Susan Walsh

Next Tuesday Americans go to the polls in one of the most closely-watched midterm elections in recent history.

At stake on November 6th is control of the two houses of Congress. All 435 seats in the House of Representatives and a third of the Senate’s 100 seats are up for grabs. In addition, 36 governor seats, various state legislature seats and other local issues will be on the ballot.

Polling over the last few months has consistently suggested that Democrats will take control of the House – they need to win 23 seats to take the majority, and with several Republican incumbents retiring, this scenario appears likely.

Less certain is the fate of the Senate. While Republicans only have a wafer-thin majority of 51 to 49, the mathematics of the race are not favourable to Democrats. Of the 35 seats on the ballot, 26 are held by Democrats or Democratically-aligned independents. Further, 10 incumbent Democratic senators are fighting to retain their seats in states that voted for Donald Trump. Democratic senators like Claire McCaskill in Missouri and Heidi Heitkamp of North Dakota are facing strong challenges from Republican candidates.

At the same time Democrats are hopeful that they can flip traditional Republican states such as Texas and Tennessee, while Arizona and Nevada could offer pick-up possibilities.

Trump may not be on the ballot, but the 2018 midterm elections are a referendum on the 45th president. Since his unlikely election as US president two years ago, the billionaire businessman has polarised the country. Having travelled around the United States in recent weeks, it has become clear to me that Trump is dominating the midterms – the love-him-or-loathe-him feeling he engenders is motivating voters on both sides, sweeping away other considerations such as healthcare and the economy.

Trump himself has played a central role in this midterm elections. Since early September he has held 30 rallies, criss-crossing the country in a bid to whip up support in swing states. A last-minute election blitz is planned for this weekend, with Trump due to hold “Make America Great Again” rallies in West Virginia, Indiana, Montana, Georgia, Florida and Tennessee.

While many Republicans in Congress initially opposed Trump’s candidacy and were horrified by his unpresidential behaviour, most have by now rowed in behind him

Confident of his ability to win votes, Trump has returned to full-on presidential campaign mode. His rallies are a rerun of the greatest hits of his 2016 campaign, touching on everything from immigration, to rants against mainstream media and Hillary Clinton, prompting chants of “lock her up”.

Trump has also been trying to control the political narrative ahead of the elections. After a wave of violence last week, with the murder of 11 worshippers at a Pittsburgh synagogue dominating news coverage, he has sought to pivot the national conversation back to hot-button topics like immigration. The president has resumed tweeting about the migrant caravan making its way through Central America. Even though its possible arrival at the US border is weeks away, he announced plans to send thousands of extra troops to the border. He also suggested ending the automatic right to citizenship for all children born in the US –a popular proposal amongst his base.

Yet while the US president appears confident that he can bring Republican voters with him, others are less sure.

Some Republicans like Martha McSally in Arizona have distancing themselves from the president in a bid to win over moderate voters. While McSally’s right-wing rhetoric and pro-Trump credentials helped her win the Republican primary in that state, she clearly feels it could be a hindrance next week.

One of the most interesting outcomes of this election will be what it reveals about Trump’s effective takeover of the Republican party over the past two years.

While many Republicans in Congress initially opposed Trump’s candidacy and were horrified by his unpresidential behaviour, most have by now rowed in behind him. Many are now waiting to see which way the wind blows in this election – whether an alliance with Trumpism is a good or bad thing with the electorate.

As for Democrats, the party is quietly confident that a “blue wave” could be coming, at least in the House of Representatives. History suggests that this may be the case – traditionally the party not in power performs well in midterm elections.

The campaign has also given national attention to rising stars within the Democratic party even if they are not successful this time around, such as Beto O’Rourke in Texas and Stacey Abrams, an African-American woman running in the gubernatorial race in Georgia, a state with a tortured racial history.

Both sides claim that their voters are energised, and early voting figures suggest a high turnout. But it is notoriously difficult to assess how that will affect the final vote. During the last election in Maine, for example, Democrats outpaced Republicans in certain districts but the Republican candidate went on to win.

What all sides agree on is that the election’s outcome will come down to turnout. Democrats hope that increased voter registration for Hispanic and young voters will help their cause. Republicans are confident that the recent controversy over Brett Kavanaugh’s nomination to the supreme court will motivate their base.

The other big force in this election is likely to be women voters. Politically-moderate suburban women could play an outsized role in 2018, while a record number of women are running for office.

Republicans are worried. As the midterm election campaign enters its final days, one of the main priorities of Republican strategists is ensuring the president does not wade into any controversy on Twitter that could suggest his disdain for women.

After that it will be up to voters to decide if this year’s midterm elections will be an endorsement or repudiation of the presidency of Trump.

1 Gardaí investigating four-lane motorway sulky race
2 Woman sues over catching Legionnaires’ Disease in luxury hotel spa
3 Is coffee good for you?
4 At least eight shot dead in German town of Hanau
5 A Russian cruiser with ‘cannibal rats’: What other ‘ghost ships’ could be out there?
Real news has value SUBSCRIBE