Mohammed Abdul (21) felt ‘humiliated’ after being thrown out of club in Gravesend, England

CCTV footage shows Mohammed Abdul being thrown out of a nightclub by bouncers in Gravesend, Kent and subsequently ploughing his car into the busy club, injuring patrons and staff. Video: Kent Police 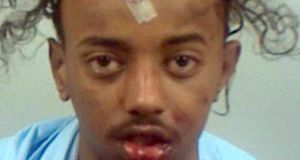 Mohammed Abdul, who was convicted on two counts attempted murder at Maidstone crown court for driving his car onto a packed dancefloor after being thrown out by bouncers. Photograph: Kent Police /PA Wire

A clubber in England who ploughed his car onto a packed nightclub dance floor after being thrown out by bouncers has been jailed for 28 years.

Mohammed Abdul said he felt “humiliated” after being ejected from Blake’s nightclub in Gravesend, Kent, on March 17th last year.

He drank at least 15 glasses of vodka, tequila shots and had “five to 10 spliffs” of cannabis before getting behind the wheel of his Suzuki Vitara.

Bouncers had ejected him for being too drunk, but he refused to leave and threatened to kill them before returning 10 minutes later with his car – injuring eight people.

The 21-year-old said he only intended to “make a nuisance of himself to get his own back on the door staff”.

A jury found Abdul, of Deptford in southeast London, guilty of two counts of attempted murder at a retrial at Maidstone crown court.

On Thursday, he was handed two concurrent 28-year sentences.

Abdul, who only had a provisional licence for the car, was also disqualified from driving until he passed his test.

Mrs Justice Cheema-Grubb, sentencing, branded his attempts to dodge responsibility “shameful”, telling the court that victims could have easily been killed in the attack and the injuries to Ms Wells could render her infertile.

She said: “It could have been a scene of carnage You have robbed that young lady of future choices and have also had a profound impact on her psychological health.

“Your motive was selfish and pathetic: it was revenge at being thrown out for being drunk.

“Your action led to panic and distress among dozens of people. Your actions have thrown away many of the best years of your own life.”

Described by the prosecution as a determined and deliberate attempt to kill, using his car as a weapon, the attack was captured on CCTV.

The footage from inside the club showed Abdul driving past bouncers, racing down an alleyway packed with clubbers before stopping and then accelerating onto the dancefloor in a marquee connected to the venue.

From a camera inside the club, the vehicle’s front lights could be seen getting closer and closer as dancers mingled, unaware the Suzuki was hurtling towards them.

One man could then be seen spread-eagled on the bonnet, lifted off his feet as the Suzuki rammed into him from behind.

Others fled to safety as security guards pursued the car, shortly before midnight. The car then reversed, its registration plate hanging off at an angle, as patrons staggered to get to their feet.

The footage showed some clubbers appearing to swarm the vehicle and showering it with a volley of blows, while others looked visibly distressed in the corner of the nightclub.

Libby Clark, senior crown prosecutor in the CPS South East’s complex casework unit, said: “It was sheer luck that no one was killed that night, but the impact on those caught up cannot be underestimated.

“Aside from the physical injuries they suffered, they had to experience the nightmare of having a car hurtle towards them with no warning as they were enjoying a night out.”– PA