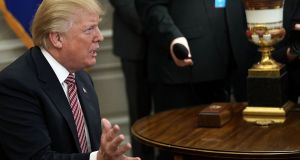 US president Donald Trump toughened his stance on immigration on Wednesday, potentially complicating ongoing efforts on Capitol Hill to agree a package to solve an impasse on the issue.

As fragile talks continued in the Senate in a bid to secure agreement on an immigration Bill by the end of this week, Mr Trump insisted that all “four pillars” of the White House’s demands on immigration be met in the forthcoming legislation. These pillars include resolving uncertainty over Daca – the programme that grants legal protection to so-called “Dreamers” – an end to chain migration, the cancellation of the visa lottery scheme and the building of a border wall with Mexico.

He urged senators to oppose any legislation that fails to fulfil all four pillars and to oppose any “short-term Band-Aid approach”.

“The overwhelming majority of American voters support a plan that fulfils the framework’s four pillars, which move us towards the safe, modern, and lawful immigration system our people deserve,” he said in a statement.

But even as he spoke, senators appeared to be moving towards a new Bill that would fail to address two of his demands – ending the visa lottery programme and the construction of a border wall.

A bipartisan group of senators assembled an immigration Bill that could be voted on as early as Thursday. It includes a measure to protect up to 1.8 million Dreamers – young people who were brought to the US illegally as children – as well as a $25 billion fund to beef up border security and tackle illegal border crossings.

The proposal was devised by Republicans and Democrats, but needs 60 votes to pass the Senate.

With Daca (Deferred Action for Childhood Arrivals), which was introduced by president Barack Obama to protect Dreamers, due to expire on March 5th, Congress must settle on a replacement programme in the coming weeks.

Representatives of the Irish Lobby for Immigration Reform were among those who have held meetings with key players on Capitol Hill this week. Ciaran Staunton, the head of the immigration group, said it was vital that the specific situation of the undocumented Irish was considered, as well as any impact that changes to the visa lottery system may have on Irish immigrants.

With Congress due to close for recess next week, the Senate is rushing to agree a package, with the House of Representatives expected to take up the matter later this month.

The previous effort to revise the US immigration system passed the Senate in 2013, but was not taken up in the House because of opposition to that proposal.

Separately, the controversy over the White House’s handling of former aide Rob Porter continued as the House oversight committee announced it would investigate the matter.

Mr Porter worked in the White House for more than a year without full security clearance and despite allegations of past domestic abuse.

Mr Porter left his job in the West Wing last week, but questions have persisted about how long senior White House officials knew about the allegations and why Mr Porter was given access to sensitive information without permanent security clearance.

Trey Gowdy, the Republican head of the oversight committee, confirmed that an investigation had been opened on Tuesday night. House speaker Paul Ryan said he had been informed of the inquiry, and urged the White House to improve its vetting system.

“They have work to do to improve their vetting system,” he said. “I don’t know how exactly they’ll do that; I will leave that to them. But chairman Gowdy is doing his proper job on oversight.”

Mr Trump said he was “totally opposed to domestic violence of any kind” when asked by reporters on the matter.