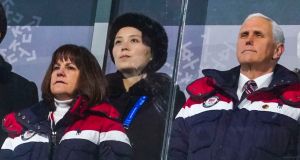 When the North Korean leader, Kim Jong-un, decided to send a large delegation to the Winter Olympics in South Korea this month, the world feared he might steal the show.

If that was indeed his intention, he could not have chosen a better emissary than the one he sent: his only sister, Kim Yo-jong, whom news outlets in the South instantly dubbed “North Korea’s Ivanka”, likening her influence to that of Ivanka Trump on her father, US president Donald Trump.

Much as Trump has been when travelling with her father, Kim was closely followed by the news media during her three-day visit to Seoul and to Pyeongchang, which is hosting the Olympics. She flew back to North Korea on Sunday night.

Flashing a sphinxlike smile and without ever speaking in public, Kim managed to outflank Trump’s envoy to the Olympics, vice president Mike Pence, in the game of diplomatic image-making. While Pence came with an old message – that the United States would continue to ratchet up “maximum sanctions” until the North dismantled its nuclear arsenal – Kim delivered messages of reconciliation as well as an unexpected invitation from her brother to the South Korean president, Moon Jae-in, to visit Pyongyang, the North Korean capital.

Kim attracted attention wherever she turned up – at the opening ceremony, in the stands at the Olympic debut of the unified Korean women’s ice hockey team, and at a performance in Seoul by a North Korean art troupe. But Pence drew the greatest reaction for where he did not appear: most pointedly, at a dinner Moon hosted before the opening ceremony.

That meant that he avoided spending much time with the North Korean delegation, including Kim Yong Nam, the country’s ceremonial head of state.

And while the unified Korean Olympic team received a standing ovation as they marched into the stadium Friday night, Pence remained seated, which critics said was disrespectful of the athletes and his host, Moon. Pence is playing “right into North Korea’s hands by making it look like the US is straying from its ally and actively undermining efforts for inter-Korean relations”, said Mintaro Oba, a former diplomat at the State Department specialising in the Koreas, who now works as a speechwriter in Washington.

Kim, on the other hand, “is a very effective tip of the spear for the North Korean charm offensive”, Oba said.

Analysts of Korean affairs said that Pence had missed an opportunity. “I think it would have been really helpful to the conversation of denuclearisation for the Pences to have appreciated the effort put into bringing team unified Korea into the stadium,” said Alexis Dudden, a professor of history at the University of Connecticut. “And it wouldn’t have lessened the American position.”

She added, “The fact that he and Mrs [Karen] Pence didn’t stand when the unified team came in was a new low in a bullying type of American diplomacy.”

In a pool report filed from Pence’s flight to Alaska from Pyeongchang on Saturday night, a senior administration official said that the vice president had not been trying to avoid the North Koreans so much as he was trying to ignore them.

For Pence’s supporters, “I think the hard-line wing of the United States thinks he did a fine job”, said David C Kang, director of the Korean Studies Institute at the University of Southern California. And while Moon could not miss the chance to “lower the temperature in the room” by engaging with Kim during her visit for the Olympics, her public relations blitz could subject the South Korean president to criticism that “he fell for a charm offensive”, Kang said.

At a protest Sunday in central Seoul, where a few hundred anti-North Korea demonstrators waving South Korean and US flags gathered and shouted slogans denouncing Kim Jong-un, Yang Sun-woo (55) said, “I’m afraid a lot of Koreans have been fooled by Kim Yo-jong’s visit.”

“It’s very unfortunate that the Pyeongchang Olympics are becoming the Pyongyang Olympics when South and North Korea are still at odds with each other over ideologies,” added Yang, who carried a foam head depicting a bloodied face of the North Korean leader.

Kim, who is believed to be 30, was a natural choice for the trip to South Korea. Her clout, because of her shared bloodline, is unmistakable.

At home, she is mindful of the need to keep the spotlight on her brother. When senior officials cluster around him, reverentially taking notes, she lingers in the background. When her brother speaks in public, she hides behind a pillar, occasionally peeking out as if to make sure that all is going well.

As the first immediate member of the North’s ruling family to visit South Korea, Kim was swarmed by the local news media. Even before she touched down in her brother’s private jet at Incheon airport, west of Seoul, the approach of the plane drew exhaustive news coverage.

Commentators analysed her no-nonsense hairstyle and dress, her low-key makeup and the sprinkle of freckles on her cheeks. After she attended a luncheon at the presidential palace Saturday, it released photographs of her message of hope that “Pyongyang and Seoul get closer in our people’s hearts”. Social media promptly lit up with analysis of her peculiar handwriting.

Her quietly friendly approach while in South Korea – photographers repeatedly captured her smiling – seemed to endear her to some observers.

Waiting to enter the concert in Seoul on Sunday night, where Kim sat next to Moon, Lee Hwa-ik (61), president of the Galleries Association of Korea, said that Kim “seems like someone we can become closer to on a personal level and on a human-to-human level”.

Others said they were horrified by the notion that Kim could lull South Koreans, or anyone else, into forgetting the repression and human rights abuses of her brother’s regime. “That’s the face of the Kim family, which wouldn’t even flinch when tens of thousands of people died for it,” one Twitter user wrote. “I see the arrogance and ruthlessness that one cannot find in people who grew up in a free society.”

A group of university students who had come to cheer on the Korean women’s hockey team on Saturday night (the Koreans lost to Switzerland, 8-0), said they were excited about the historic moment and having the chance to see women from the two countries play together.

But they drew a sharp line between the athletes and citizens of North Korea, on one hand, and the dignitaries sitting in the stands representing Kim Jong-un’s regime on the other. “I think Kim Jong-un is really a bad person and a villain,” said Park Keon-ho (24), a computer science student at Korea University of Technology and Education. “But I love North Koreans. I think North Koreans and South Koreans were all together as one family, and we come from the same root.” – New York Times