Trump to make Florida his permanent residence instead of New York 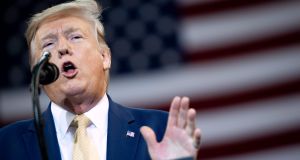 US president Donald Trump said on Thursday he will be making Palm Beach, Florida, his permanent residence instead of his Trump Tower apartment in New York City.

Mr Trump has owned the Mar-a-Lago estate in Palm Beach since 1985 and has spent more time there during his presidency than at his penthouse apartment on Fifth Avenue in New York.

“My family and I will be making Palm Beach, Florida, our Permanent Residence,” Mr Trump said on Twitter.

“Despite the fact that I pay millions of dollars in city, state and local taxes each year, I have been treated very badly by the political leaders of both the city and state,” he said, referring to New York.

A life-long New Yorker, Mr Trump was raised in the city’s Queens borough and later moved to Manhattan. Trump Tower serves as both his residence and the headquarters of the Trump Organisation, his real estate company.

“As President, I will always be there to help New York and the great people of New York. It will always have a special place in my heart!” Mr Trump said.

1600 Pennsylvania Avenue, the White House, is the place I have come to love and will stay for, hopefully, another 5 years as we MAKE AMERICA GREAT AGAIN, but my family and I will be making Palm Beach, Florida, our Permanent Residence. I cherish New York, and the people of.....

....this decision, but in the end it will be best for all concerned. As President, I will always be there to help New York and the great people of New York. It will always have a special place in my heart!

“Good riddance. It’s not like @realDonaldTrump paid taxes here anyway. He’s all yours, Florida,” Mr Cuomo said in a tweet.

Mr De Blasio said on Twitter: “Don’t let the door hit you on the way out or whatever.”

Mr Trump is running for re-election in November 2020 and, if he wins, would make the White House his home until January 2025.

An attachment lists his “other places of abode” as 1600 Pennsylvania Avenue, the address for the White House, and his private golf club in Bedminster, New Jersey, where he spends warm-weather weekends and a few weeks every summer. Since becoming president, Mr Trump has spent 99 days at Mar-a-Lago compared with 20 days at Mr Trump Tower, according to NBC News. Although Mr Trump ran his presidential transition from Trump Tower and some aides had expected him to spend many weekends there in his Louis XIV-style triplex on the 58th floor, his presence created traffic headaches for New Yorkers and logistical and security challenges for the Secret Service.

White House officials declined to say why Trump changed his primary residence, but a person close to the president said the reasons were primarily for tax purposes. In his Twitter posts Thursday night, the president claimed that he paid “millions of dollars in city, state and local taxes each year.” There is no way to fact-check his assertion; he has never released his tax returns. Mr Trump, who is deeply unpopular in New York, was infuriated by a subpoena filed by Cyrus Vance, the Manhattan district attorney, seeking the tax returns, the person close to the president said. Changing his residence to Florida is not expected to have any effect on Mr Vance’s case, which Mr Trump has sought to thwart with a federal lawsuit.

It was unclear how much time he would spend in New York in the future or if he would keep his triplex at the top of Trump Tower. Under New York law, if he spends more than 184 days a year there, he will have to pay state income taxes. Florida, which does not have a state income tax or inheritance tax, has long been a place for the wealthy to escape the higher taxes of the Northeast. Changing his primary residence could carry significant tax implications for Trump, although how much is unclear without seeing his returns. But in changing his residence to Florida, he would most likely be avoiding New York state’s top tax rate of nearly 9 per cent and New York City’s top rate of nearly 4 per cent.

Leaving New York could also save money for Trump’s heirs at the time of his death. New York imposes a top estate tax rate of 16 per cent for estates larger than $10.1 million. In an article in the Florida Bar Journal in January 2019, three lawyers with Proskauer Rose wrote about the recent wave of people moving from New York to Florida in “large part” because of the repeal of the state and local tax deduction that was a byproduct of the tax Bill that Trump signed into law in 2017.–Reuters and New York Times