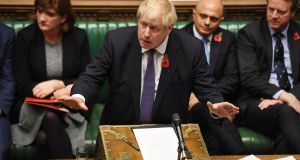 British prime minister Boris Johnson during Monday’s debate in the House of Commons.

Boris Johnson knew long before Monday’s vote on his motion calling for an early general election that he would not win the two-thirds majority he needed under the Fixed-Term Parliaments Act (FTPA). But he also had a ready-made plan B, courtesy of last weekend’s manoeuvres by the Liberal Democrats and the Scottish National Party (SNP).

After rejecting the prime minister’s offer to schedule extra time this week to debate the withdrawal agreement Bill (WAB) in return for an election on December 12th, the Liberal Democrats and the SNP wrongfooted other opposition parties with a proposal of their own. They would introduce a short Bill, bypassing the FTPA to allow for an election on December 9th. Crucially, they insisted that the prime minister should guarantee that he would not bring the WAB back before the dissolution of parliament ahead of the election.

Both parties on Monday night made sceptical noises about Johnson’s plan to introduce a similar Bill setting the election date for December 12th. Liberal Democrats leader Jo Swinson suggested that she would only back an election on December 9th because the later date could mean that students would miss out on voting.

But both the Liberal Democrats and the SNP have an interest in an early election and both know that a Bill backed by the government has a better chance of passing all its stages quickly. And if the government is willing to compromise on the election date, they are likely to back the Bill.

For the Liberal Democrats, an election before Brexit is delivered allows them to capitalise on their status as the most boisterously anti-Brexit party. The SNP are on course to capture seats from all other parties in Scotland but their fortunes could decline in January when former leader Alex Salmond goes on trial for alleged sexual assault.

The latest manoeuvres have, as Johnson put it in the Commons, left Jeremy Corbyn “snookered” as he faces being bounced into an election many of his MPs fear.

The election will not, however, be fought on ideal terrain for the prime minister, who will have failed to deliver on his promise to leave the European Union “do or die” by October 31st. He will not have passed his Brexit deal through parliament by the time of a December election. And despite his promises of more money for police, hospitals and schools, voters will not see any improvement in public services by the time they go to the polls.