Irish election monitors called on to observe US mid-terms 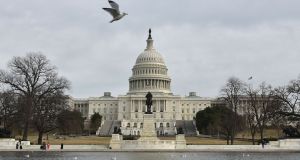 The mid-term congressional elections in the US are on November 6th. Photograph: Mandel Nagen/AFP/Getty Images

The State is to send a team of election observers to monitor the US mid-term congressional elections in November, reversing its previous position that it did not focus on monitoring the conduct of democratic elections in the EU, the US or Canada.

The Department of Foreign Affairs and Trade has written to its team of Irish election observers, who volunteer for deployment across the world to ensure elections are fair and transparent, seeking volunteers to serve on the US mission in October and November.

The department maintains a roster of Irish observers who participate in election missions primarily organised by the European Union and the Organisation for Security and Co-operation in Europe (OSCE).

In correspondence sent on Friday, the department said it had received a request from the OSCE to nominate long-term observers for the mid-term congressional elections in the US on November 6th.

That ballot will elect members for each of the 435 House seats and 34 of the 100 Senate seats. US president Donald Trump’s Republican party is hoping to maintain a majority in both houses.

Minister of State for Foreign Affairs Joe McHugh told the Dáil in February last year that, in deploying election observers, the standard practice had been to focus on elections in emerging democracies and not to deploy them for elections in EU member states, the US or Canada.

He said international election monitoring missions played “an important role in the promotion of democracy and human rights”.

The observers who volunteer for the mission are expected to arrive in Washington on October 6th and to depart on November 11th.

Earlier this month, the Department of Foreign Affairs called for applications from individuals who wished to take part in overseas election monitoring missions.

Officials told the Oireachtas Public Accounts Committee in June there had been a delay in replacing the current five-year monitoring roster due to “staffing issues”.

Countries to which a total of 46 Irish observers were sent in 2017 included Armenia, Turkey, Albania, Mongolia, Kosovo, Kenya, Georgia, the Kyrgyz Republic, Liberia and Nepal. The total cost to the department of deploying observers was €253,677 in 2017.

Last July, Solidarity TD Paul Murphy asked the Minister for Foreign Affairs the reason one in five of those on the roster had still not been deployed since the establishment of the current roster in 2013 while others had had “numerous deployments”.

Minister of State Ciarán Cannon said at that time that, following an independent appraisal process, an election observation panel of 200 members was established in May 2013 for a five-year period, with a reserve panel of 10.

He was “confident that the current roster is well equipped to deal with the requirements of the EU and the OSCE missions”.

At that time, 133 members of the current roster had taken part in missions and 61 members had not yet done so.

Members of the election roster who are nominated as long- or short-term observers by the department do not receive remuneration.

They are paid a daily allowance, as determined by the EU and the OSCE, to cover the cost of food, accommodation and other out-of-pocket expenses, along with a pre-departure grant of €600.