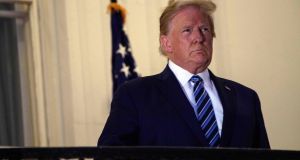 US president Donald Trump on a White House balcony after his return from the Walter Reed Medical Center, where he was treated for Covid-19. Photograph: Nicholas kamm/AFP via Getty Images

US president Donald Trump is expected to make his first public appearance since his diagnosis with coronavirus on Saturday when he hosts an event on the south lawn of the White House.

Though plans were still in flux on Friday night, Mr Trump was considering addressing a group of supporters from a balcony at the White House.

The October 15th presidential debate between Mr Trump and Democratic nominee Joe Biden will not proceed, the Commission on Presidential Debates said in a statement on Friday, adding that both campaigns had announced “alternate plans for that date”.

“It is now apparent there will be no debate on October 15th, and the CPD will turn its attention to preparations for the final presidential debate scheduled for October 22nd,” the commission said in an emailed statement.

However, Mr Trump, who was diagnosed with Covid-19 more than a week ago, has been keen to return to the campaign trail.

In a lengthy interview earlier on Friday, he told conservative radio show host Rush Limbaugh that he recovered “immediately” from the virus after taking treatments like Regeneron’s Regn-Cov2 antibody cocktail.

“People are going to get immediately better like I did. I mean, I feel better now than I did two weeks ago,” he said. “It’s crazy.”

He repeated his pledge to make treatments available free for Americans.

But he also suggested that his condition was more serious than had been thought, hinting that he might not have survived but for medical intervention.

“They said ‘you were going into a very bad phase’,” he recalled as he described his experience at the Walter Reed Medical Center. “I’ve lost five people, at least five people that were friends of mine. One in particularly, like an incredible guy who went into the hospital. He was dead within three days,” he told the talk show host.

Mr Trump’s also lambasted House of Representatives speaker Nancy Pelosi as a “nut job” as the Californian Democrat introduced a Bill to the House allowing for a commission to be appointed to assess a president’s health and oversee the transfer of power to a vice-president.

The Bill referred to the 25th amendment, the clause in the constitution that deals with the transfer of power if a president is incapacitated.

“This legislation applies to future presidents,” Ms Pelosi said introducing thelegislation. “But we are reminded of the necessity of action by the health of the current president.”

The move came a day after Ms Pelosi implied that Mr Trump’s behaviour in recent days could be linked to the medication he is taking since his diagnosis with Covid-19.

“The president is, shall we say, in an altered state right now,” she said at her weekly press conference.

But Mr Trump claimed on Twitter that the new legislation was introduced “in order to replace Joe Biden with Kamala Harris. The Dems want that to happen fast because Sleepy Joe is out of it!!!”

Mr Trump’s two-hour phone call with Limbaugh came ahead of an expected Friday night appearance on Fox News when he was due to be interviewed – and medically examined – by the news channel’s resident medical expert Dr Mark Siegal.

His appearance on the channel was scheduled despite the president strongly criticising the network during his interview with Limbaugh. Mr Trump awarded the controversial right-wing talk show host the presidential medal of freedom earlier this year during his State of the Union address.

On Thursday the president touted the possibility of holding a rally in Florida this weekend. His son, Donald Trump jnr, campaigned in the state on Thursday, taking part in an indoor event at a hotel in Panama City Beach that appeared to violate coronavirus restrictions. - Additional reporting, Reuters