Trump’s handling of his illness only deepens his electoral trouble

America Letter: As election day approaches, this president needs all the help he can get 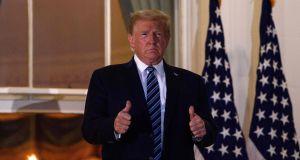 US president Donald Trump gives the thumbs-up from the Truman Balcony upon his return to the White House from Walter Reed Medical Center, where he underwent treatment for Covid-19. File photograph: Getty

The extraordinary events of the past 10 days, during which US president Donald Trump was hospitalised for coronavirus treatment and then returned to the White House, have delivered another twist to the dramatic tale of the Trump presidency.

Trump’s defiant gesture as he removed his face mask while standing on the Truman Balcony on Monday night captured so much about the president’s response to the virus. The highly staged move exhibited his tendency towards demagoguery and his persistent refusal to accept the science around Covid-19.

His insistence on returning to the White House, while still infectious, put not only his staff but also journalists at risk.

Though one of the most recognisable buildings in the world, the White House always surprises visitors by its relatively modest size. This was a deliberate move by the founders of the new republic, who wanted to move away from the excesses of royalism epitomised by palaces like Versailles and instead design a “people’s house” befitting a country born of revolution.

Two hundred years later the result is a relatively small space where the business of the nation is conducted from a cramped West Wing.

Similarly, the James Brady press room – named after the press secretary who was shot and permanently disabled during the assassination attempt on Ronald Reagan in 1981 – is remarkably confined, its journalists sitting cheek by jowl next to the executive offices in the West Wing.

As Washington deals with an uptick in coronavirus cases, many of which are believed to have developed from the “super-spreader” ceremony held for Amy Coney Barrett two weeks ago, Trump is itching to get back on the campaign trail. A note from his doctor on Thursday said he could return to public engagements from Saturday. But experts have questioned the rationale and worry about an infected president spreading the virus further.

With polling day fast approaching, the question now is how recent events have affected his re-election chances.

Though the direct impact of Trump’s coronavirus diagnosis is difficult to gauge, none of this is good for the president. Trump could have used this opportunity to recalibrate his coronavirus strategy. Polls have shown continuously that most Americans disapprove of his handling of the pandemic.

The president’s illness was his opportunity to bond with Americans over his own experience with the virus. But rather than it being a turning point, Trump’s brush with the pandemic has only deepened his cavalier attitude to Covid-19 and increased the empathy gap between the president and the public, as he urged voters not to let the virus dominate their lives in a series of ill-advised video messages.

His declaration that he has been “cured”, and his promise to provide free doses of Regeneron’s therapeutic drug Regn-Cov2 to hundreds of thousands of Americans was unhelpful and delusional, given that the treatment has not been approved by US regulators and the company itself said it only has enough doses for 50,000 patients.

Although Trump may have been reassured about his strategy within his own echo chamber of Fox News and social media, a series of polls in recent days looking at voter trends across the country suggest the president could be in serious trouble.

A CNN poll this week put Joe Biden 16 points ahead nationally, with 57 per cent of voters surveyed supporting the Democratic candidate compared with 41 per cent for Trump. That represents a huge lead for a presidential challenger three weeks ahead of the election.

However, more significant is polling in swing states, given that Biden could still win the national vote by more than Hillary Clinton and lose the election. Here too the news is not good for Trump. A Quinnipiac University poll showed Biden leading by 13 points in Pennsylvania and 11 points in Florida, arguably the two most important battleground states.

There are signs that Biden is making inroads in previously safe Republican states like Iowa, Ohio and Arizona. In particular, a sharp slip in support for Trump among over-65s is a warning sign.

The CNN poll put Trump’s support among seniors at just 39 per cent – a remarkable turnaround from 2016, when he won the over-65 vote by double digits, but unsurprising given elderly concerns around coronavirus.

Given the worrying data from the polls, it is remarkable that Trump refused to take part in next Thursday’s presidential debate. Forfeiting the opportunity to connect with up to 80 million Americans makes no sense for the candidate who at this moment appears to be losing. As election day nears, Trump needs all the help he can get.