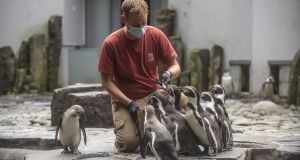 A zookeeper feeding penguins at a closed zoo in Prague. The Czech government has shut zoos and indoor sports venues for two weeks to slow the spread of coronavirus. Photograph: Getty Images

The Czech Republic is introducing new restrictions and Slovakia is mobilising troops to help fight the spread of coronavirus as alarm grows across central and eastern Europe over soaring rates of infection in many countries.

Czech officials announced a record daily rise of 5,394 new cases on Friday, when indoor sports venues and events were shut down and tighter rules on the operation of bars and restaurants came into force.

From Monday cultural venues, including theatres and cinemas will close, state institutions will work for only two days a week, most universities will move all lectures online, and secondary schools will halve their amount of face-to-face teaching.

“The situation is very serious. We have a high incidence of the virus, and there is community transmission...Either we will all comply with the measures, or we will have to take further restrictive steps,” Czech prime minister Andrej Babis said on Friday.

“I beg you, it’s the weekend, stay home. If you can, work from home next week,” he added, as health officials raised concerns for how Czech hospitals would cope if the country failed to halt one of fastest-growing infection rates in Europe.

After dealing swiftly and successfully with the spring wave of coronavirus, Mr Babis has admitted getting “carried away” and lifting restrictions too swiftly in May and June.

“At the present time we have 1,700 people hospitalised with Covid-19. If the infection continues to spread at this rate in a week’s time this number will double and in two weeks’ time our hospitals will be filled to maximum capacity,” Czech health minister Roman Prymula warned on Thursday.

He said there was now “almost a war between the younger and older generation, where the younger don’t consider the illness too risky for themselves, while the older have a realistic concern that something can happen to them”.

Neighbouring Slovakia registered a record rise of 1,184 cases on Friday, and the government announced that it would make 1,500 soldiers available to assist the health ministry with tasks that are expected to include contact tracing.

Other countries around the region, including Poland, Hungary, Ukraine, Romania and Bulgaria, also reported a record one-day climb in infections on Friday.

Cases in Russia increased by 12,126, almost 500 more than the previous highest daily rise on May 11th.

“It’s clear that numbers are growing. Today was really a sad record for Russia. Clearly many people still don’t consider it essential to look after their own health,” said Kremlin spokesman Dmitry Peskov.

New infections in Moscow have grown by more than 50 per cent in the last week, and city mayor Sergei Sobyanin has urged Muscovites over 65 to stay at home and told companies to ensure that at least 30 per cent of staff work remotely.

“All that’s understood, but we have to hold on for a few more months. Because production of a vaccine is coming, and that will basically get rid of the problem.

“But for that we must just pull ourselves together, concentrate, and do everything we can to avoid some kind of collapse.”