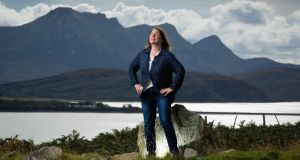 (In two years, thousands of tourists and space enthusiasts could be gathering in the far north of Scotland to watch an unlikely event, the inaugural flight of a rocket blasting off from a peat bog usually grazed by deer and sheep.

The Mhoine peninsula in Sutherland, a desolate stretch of peatland punctuated by mires and tiny lochs overlooking the Pentland Firth, has been chosen as the site of one of the UK’s first spaceports - provided it eventually wins approval from the Civil Aviation Authority.

In 2023, its backers hope to see small rockets, built in Scotland using carbon fibre and graphene, with engines made by the latest 3D printers, put the Mhoine port at the vanguard of a burgeoning industry firing microsatellites into near-earth polar orbit.

For centuries the land has been grazed by sheep owned by local crofters, who cherish uninterrupted views of Orkney to the east and an archipelago of smaller islands sitting closer to shore. To the south, beyond a tidal estuary and an undulating expanse of peatland, sit the imposing peaks and ridges of Ben Loyal and Ben Hope.

The proposal to build the spaceport from Highlands and Islands Enterprise (HIE), the region’s development agency, caught everyone locally by surprise, launching an intense debate among the crofters about the opportunities and risks.

“We were gobsmacked,” said Dorothy Pritchard, chair of Melness estate, which owns the Mhoine peninsula on behalf of 59 crofters.

“We all had a meeting and we thought ‘right, we’re for it, it’s exciting, but not at any cost’, and that was our mantra,” Ms Pritchard said. “We negotiated for ages. I think we drove HIE mad. We wanted to protect crofters’ rights.”

After a long and at times fiery contest between competing local campaigns, both for and against, the €18.6 million ( £17 million) project won planning permission in June from Highland council, which authorised 12 launches a year from the site.

Councillors approved the construction of a launchpad, access roads, a control room and rocket-assembly building surrounded by a 3.6km wide exclusion zone. Ms Pritchard expects a flood of sightseers for the first launches. “It’s not Cape Canaveral,” she cautioned, but added: “You will get people who are really interested in rocket launches. I think people will come to watch. Definitely.”

To the surprise of its opponents, the planning application was not called in by Scottish ministers, but its future is far from guaranteed.

HIE first needs the approval of the land court, a body which adjudicates on changes of use for legally designated crofting land, for permission to build the site. That ought to be a formality, although several absentee crofters are thought to be opposing approval.

HIE also needs to finalise its deal with Orbex, a rocketry firm based in Forres near Inverness, which is closely associated with the project. Orbex is building the petite, 19m-tall launch vehicles HIE hopes will carry dozens of microsatellites into space from the Mhoine using low-pollution biopropane fuel.

Sir Martin Sweeting, chairman of trustees for the National Space Centre in Leicester and an expert in small satellites, said northerly and coastal sites such as this will play a central role in the UK’s rapidly-expanding small satellites industry. The satellites are mostly used for communications, such as providing internet coverage or GPS services.

They ensure safe launches far from population centres, and are much closer to the polar orbits the satellites will use. “There’s no doubt there is pent-up demand for small rocket launches,” he said. “There’s quite a bit of work to do but it’s certainly feasible, and it’s certainly worth doing.”

The contractor which eventually runs the port must then apply for an operators licence from the CAA: the UK government has yet to legislate to allow commercial space flights, with the regulations due to be in place by next summer.

The Mhoine is within one of the most-heavily designated regions in the UK because of its rare and threatened wildlife and plant species; the application to launch rockets there is expected to trigger a fresh battle with environment campaigners about the site’s suitability. Anders Povlsen, the Danish billionaire who owns land nearby, is also considering legal challenges.

It is protected under the Ramsar convention, an international treaty ratified by the UK in 1976 covering internationally important wetlands. The peninsula includes two special sites of scientific importance (SSSIs) designated by the UK government, and sits within an EU-designated special protection area (SPA).

Sitting on the north-western edge of the Flow Country, a vast expanse of blanket bog covering much of Caithness and Sutherland, its suite of designations protect its birdlife such as greylag geese, golden eagles and dunlin; its rare water-dependent plants, dwarf shrubs and alpine heath; its geology; and the peatland itself.

John Williams, chairman of the anti-spaceport campaign Protect the Mhoine, believes the operators licensing process gives critics another chance to stop it. “The battle is far from over, let alone lost,” he said.

Mr Williams, a retired physics teacher who moved to the area six years ago from Kent, believes the project comes at too high an environmental cost: construction of the roads, buildings and launch pad will degrade the peat bog, releasing its trapped carbon into the air.

The increased traffic will overburden local roads and bridges which are already overstretched by the huge increase in tourism in Sutherland since the launch of the North Coast 500 motoring route, which has seen tens of thousands of extra car, motorbike and motorhome journeys in the region.

Williams also disputes HIE’s belief the rocket port will attract new high-tech jobs to Sutherland. “I don’t think it’s going to become a white elephant: it is a white elephant. If they stick to the limitations imposed on them by the planning permissions for small rockets and 12 launches a year, I don’t believe it will stack up economically,” he said.

Pritchard is adamant the spaceport is needed. Like many isolated Highland and island community, theirs is ageing and dwindling. The local school, once full, now has just 18 pupils. Rent from the spaceport and a promised share of its income will help Melness crofters regenerate the peat bog and invest in the community, she said.

“We don’t want damage and we don’t want to lose things. We negotiated long and hard about that,” she said. –Guardian