The US president, who is still recovering from coronavirus, refuses to say if he has tested negative

US president Donald Trump, speaking to Sean Hannity of Fox News, has declined to say whether he is yet to test negative for Covid-19. Trump did however cite his intention to get back on the campaign trail with a rally in Florida. Video: Reuters 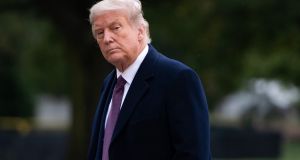 Donald Trump, who is still recovering from Covid-19, has suggested he might organise a rally in Florida on Saturday, while continuing to ignore questions on whether he has yet tested negative for the disease.

On Thursday night, Mr Trump said: “I think I’m going to try doing a rally on Saturday night if we can, if we have enough time to put it together.

“But we want to do a rally in Florida, probably in Florida on Saturday night, might come back and do one in Pennsylvania, on the following night.”

At least one Mr Trump rally in Tulsa, Oklahoma, has been linked by a local health official to a spike in coronavirus cases. Most supporters at recent Trump events have eschewed masks and social distancing measures to slow the spread of disease. Asked by Fox News’ Sean Hannity on Thursday night whether he had yet to test negative for coronavirus – or whether he had been tested at all since his positive test last week – the president did not directly respond, instead touting the experimental drugs he had been treated with. He said he would be likely be tested on Friday.

Asked by Mr Hannity whether he had had a test since testing positive last week, Mr Trump said: “Well what we’re doing is, probably the test will be tomorrow. The actual test, because there’s no reason to test all the time.”

In the rambling interview, during which he spoke with a hoarse voice, at times pausing to cough, the president leapt from one rightwing talking point to the next. He also referred to abortions as “early term executions”, after reports confirming that treatments he has taken to treat his Covid-19 were developed using cells derived from aborted fetuses – a practice his administration opposes.

During an hour-long interview with the Fox Business channel earlier in the day, Mr Trump said he wouldn’t participate in a virtual debate with his Democratic rival, Joe Biden, after the Commission on Presidential Debates announced the new format amid concerns that the president could still be contagious and spread the virus.

House speaker Nancy Pelosi, announced on Thursday that Democrats in the US Congress would meet to discuss the 25th amendment to the constitution, which contains a clause that allows a president to be removed from office against his will because of physical or mental incapacity.

Trump’s physician, Dr Sean Conley, said he anticipated Mr Trump would be able to return to public engagements on Saturday, after initially suggesting that the president might not be able to return to public life until Monday. The Centers for Disease Control and Prevention recommends that Covid-19 patients can be around others 10 days after their symptoms first appear, provided they have not had a fever in the preceding 24 hours.

Mr Trump has received several treatments, including the antiviral drug remdesivir and an experimental antibody cocktail from Regeneron Pharmaceuticals, whose chief executive has a personal relationship with the president.

On Thursday night, the president suggested he would be willing to debate Mr Biden if the moderator were Mr Hannity, or other loyal Fox News hosts Tucker Carlson, Laura Ingraham or Jeanine Pirro. “Let’s get a fair anchor, someone like the great Sean Hannity,” he said.

The chair of the nonpartisan Commission on Presidential Debates told the Associated Press on Thursday that the commission would not rethink the virtual debate, and that the final debate, scheduled for October 22nd, was still slated to go on with both candidates present as planned.

The president was hospitalised on October 2nd after announcing he had contracted the virus that has killed more than 212,000 Americans and infected more than 7.6 million in the country. He returned to the White House on October 5th, and appeared on Thursday to have left his rooms to visit the West Wing - as he did earlier this week - potentially exposing White House staff and others to the infection.

On Thursday, it emerged that White House chief of staff Mark Meadows held a 70-person indoor wedding for his daughter in Atlanta in May in defiance of state and municipal guidelines, the New York Times reported earlier on Thursday.

Meanwhile, Wisconsin opened a field hospital amid a surge in cases that has overwhelmed the state’s health care system. Governor Tony Evers said in a statement, “We’re in a crisis right now and need to immediately change our behaviour to save lives.” – The Guardian