Trump apologises to Kavanaugh for ‘terrible pain and suffering’

US president Donald Trump has presided over the swearing-in of Brett Kavanaugh to the US supreme court, Trump used his speech to hit out at the "lies and deception" faced by the judge in recent weeks. Video: The White House 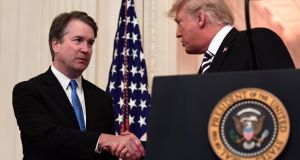 US president Donald Trump shakes hands with Supreme Court Justice Brett Kavanaugh at a ceremonial swearing in in the East Room of the White House. Photograph: Susan Walsh/AP

US president Donald Trump doubled down on his defence of Brett Kavanaugh as he apologised to the supreme court justice on behalf of the nation “for the terrible pain and suffering” he had endured.

Speaking at a ceremony to mark Mr Kavanaugh’s confirmation to the court in the East Room of the White House on Monday night, Mr Trump said “those who step forward to serve our country deserve a fair and dignified evaluation, not a campaign of political and personal destruction based on lies and deception”.

“What happened to the Kavanaugh family violates every notion of fairness, decency and due process.”

Senate majority leader Mitch McConnell, who was instrumental in securing Mr Kavanaugh’s passage to the court, received a standing ovation as he entered the room.

Mr Kavanaugh spent his first day in his new job on Tuesday, taking his place at the far right of the court, the seat which is traditionally reserved for the most junior justice on the bench. The judges heard arguments in three cases, including a case involving sentences for people convicted of possessing firearms in federal court.

In comments at the White House ceremony on Monday night, Mr Kavanaugh thanked Mr Trump for appointing him to the court.

“I’ve seen first hand your deep appreciation for the vital role of the American judiciary,” he said. “I am grateful for your steadfast, unwavering support throughout this process.”

He also name-checked senators Susan Collins and Joe Manchin, who voted for him on Saturday, as well as Lindsey Graham, who helped tip the balance of the Senate in favour of Mr Kavanaugh after he launched a passionate defence of the nominee during his testimony to the Senate judiciary committee. “I’ll be forever grateful to each of them and to all the senators who carefully considered my nomination,” he said.

In an apparent reference to the controversy that surrounded his appointment following allegations of sexual misconduct and accusations that he displayed political partisanship, Mr Kavanaugh said he was taking this office “with gratitude and no bitterness”, following a “contentious and emotional” confirmation process.

“My approach to judging remains the same: A good judge must be an umpire, a neutral and impartial decider that favours no litigant or policy,” he said.

Mr Kavanaugh’s confirmation as a supreme court judge was delayed following separate allegations of sexual misconduct in the past made against him by three women.

His confirmation by the Senate – by 50 votes to 48 – is an important political victory for Mr Trump, who has now appointed two supreme court justices since his inauguration in January last year.

Mr Kavanaugh’s appointment could be particularly significant for future rulings as he replaces Anthony Kennedy, who was often a swing-vote on the court. Though a Republican nominee, Justice Kennedy often sided with more liberal members of the court on key issues such as abortion and same-sex marriage.

In the days since the Senate confirmed Mr Kavanaugh’s appointment by the tightest margin in decades, Mr Trump has heightened his rhetoric on the nomination process, denouncing what he called the “angry left wing mob”.

“Democrats have become too EXTREME and TOO DANGEROUS to govern. Republicans believe in the rule of law – not the rule of the mob. VOTE REPUBLICAN!” he wrote on Twitter in the wake of Mr Kavanaugh’s nomination.

Mr Trump, and other senior Republicans, have predicted that the controversy over Mr Kavanaugh’s nomination is likely to energise conservative voters in the midterm elections in four weeks’ time.

The president departed Washington on Tuesday afternoon for Iowa where he was due to hold a “Make America Great Again” rally. The president is expected to announce a new programme to boost ethanol sales, in a bid to please farmers who may be concerned about the ongoing trade dispute with China. His trip follows visits to Minnesota and Kansas over the last few days.