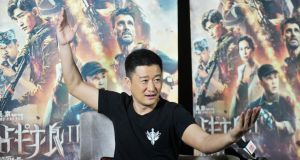 Director Wu Jin has spoken of watching the People’s Liberation Army in action after the 2008 earthquake, telling the ‘People’s Daily’ how he “wanted to showcase the kindness, wit, courage and sacrifice of Chinese soldiers”. Photograph: VCG/VCG via Getty Images

Holding aloft the red flag of China, former special forces operative Leng Feng, played by martial arts hero Wu Jing, bellows to the warring African factions: “We are Chinese”, prompting both sides to lower their weapons and let the avenging heroes through.

Spoiler alert for any fans of wildly violent, patriotic Chinese propaganda movies, but this is a key scene in Wolf Warrior 2, now the all-time best performer at the Chinese box office having taken €485 million in ticket sales.

The movie’s popularity reflects a growing sense of China’s expanding military prowess and rising influence overseas, characterised by its widescale investments in Africa, its emerging position as honest broker in the Korean nuclear crisis and refusal to back down on its territorial ambitions in the South China Sea despite international condemnation.

The movie’s timing is excellent. Earlier this year, China opened a naval base in Djibouti, a big step in its growing military presence abroad and it has also invested heavily in expanding its navy to protect its maritime claims.

As Rambo or Black Hawk Down did for the US armed forces, Wolf Warrior 2 portrays the Chinese military as a powerful force with major impact overseas, but unlike the western movies, there is no questioning of the status quo in Wolf Warrior 2. The message is in the tagline of the movie: “Anyone who offends China will be killed no matter how far away they are.”

This refers to a similar quote by the mighty general Chen Tang in the Han Dynasty (206 BCE to AD 220), a golden age of Chinese history, who made the threat against the nomadic tribes to the north.

Also directed by Wu, the movie takes place in an unnamed African country riven by civil war. Leng Feng has been booted out of the commandos for attacking a property developer trying to tear down the home of a fallen comrade’s mother.

Wu has spoken in interviews of his pride when watching the People’s Liberation Army in action in areas such as Sichuan after the earthquake in 2008.

He told the People’s Daily how he “ wanted to showcase the kindness, wit, courage and sacrifice of Chinese soldiers”.

The movie is a two-hour assault on the senses, making the film feel like a video game. The martial arts choreography, and an epic tank battle, are highlights. China has no film classification system, and the violence didn’t seem to bother the children watching, or their parents.

Sexist and racist tropes abound, with wave after wave of useless Africans mown down by evil western mercenaries, characters remarking how Africans are always happy when dancing around a bonfire and how the women are beautiful. There is even an obese black mother with a heart of gold who sings Amazing Grace. Her obese son, who refers to Leng Feng as godfather, is a comic figure who makes big eyes when eating.

These cliches are common in western movies from James Bond to Indiana Jones, but are less likely these days to make it into an epic action movie.

The nationalist Global Times, unsurprisingly, loves the film. “While the West brings only destruction and war, China brings construction and trade,” it said. The US is portrayed as a cowardly country that does not defend its interests overseas.

“The movie is a breakthrough. First, Chinese-made patriotic military movies have not been a popular genre among young people recently. Second, this movie is the first of its kind to be set outside Chinese borders,” the paper enthused.

It slams overseas commentators for suggesting the movie is a propaganda film depicting an aggressive and assertive China, insisting it is a purely commercial venture.

“The movie fed a public appetite and met their desire to see a confident and strong Chinese military force which could not only safeguard China’s national borders, but also successfully protect the safety and interests of Chinese people abroad,” it said.

There is puzzlement about the success of the film. The first instalment did well, although it did not exactly set the box office alight. The production values are significantly higher in the second movie.

The fact that it was released during the annual summer blackout period where foreign movies are banned from Chinese cinema screens, except for cartoons, to give domestic movies a boost, will have helped with receipts.

Online, the response has been equally ecstatic.

“I am a military fan. The movie is exciting and proves that China is no worse than any other country,” wrote one young woman called Sophietale, while another said: “After watching Wolf Warriors 2, you will feel lucky to have been born in China.”

After the shooting and kung-fu have run their course, Wolf Warriors 2 ends with a photograph of a Chinese passport, and a message promising the government will protect Chinese citizens wherever they go. Though whether that means Wu will be there with his fists of fury is not clear.