Trump says he will close border if wall is not funded 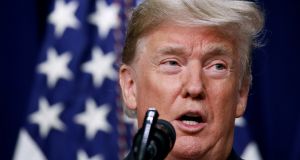 US president Donald Trump dug in on his demand for border wall funding as the partial government shutdown approached its first full week Friday, threatening again to close the southern border and cut off aid to Central America if Congress continued to deny his administration the money.

“We will be forced to close the Southern Border entirely if the Obstructionist Democrats do not give us the money to finish the Wall & also change the ridiculous immigration laws that our Country is saddled with,” Trump said on Twitter. “Hard to believe there was a Congress & President who would approve!”

With 800,000 federal employees left in limbo, Trump seemed to be embracing the stalled state of play. The White House sought to play up a divide between Democratic leaders, whose aides said it did not exist, and advisers said Trump was “surprisingly good” with missing a planned 16-day vacation at his Mar-a-Lago resort in Florida because of the shutdown.

Democrats sought to project that Trump had no clear route to funding the government without capitulating. “He has two options: caving right now or caving later,” said Brian Fallon, a former spokesman for Senator Chuck Schumer of New York, the minority leader. “They don’t want to cave right now, but they don’t have a path to get out of this bind if they hold on for two more weeks.”

We will be forced to close the Southern Border entirely if the Obstructionist Democrats do not give us the money to finish the Wall & also change the ridiculous immigration laws that our Country is saddled with. Hard to believe there was a Congress & President who would approve!

Trump’s new chief of staff, Mick Mulvaney, tried to paint incoming House Speaker Nancy Pelosi, as responsible for the impasse by implying that Schumer was willing to negotiate but she was not. “My gut was that he was really interested in doing a deal and coming to some sort of compromise,” Mulvaney said Friday on Fox & Friends, describing a meeting between Schumer and vice president Mike Pence last weekend to discuss border security funding. “But the more we’re hearing this week is that it’s Nancy Pelosi who is preventing that from happening.”

In their meeting, Mulvaney and Pence offered Democrats a deal that would have allocated $2.5 billion for border security, including new fencing, and $400 million for other immigration measures. But Schumer demurred, encouraging the vice president to accept the $1.3 billion that Republicans and Democrats in Congress had already agreed upon.

Senior aides to both Pelosi and Schumer dismissed Mulvaney’s suggestion that they were in disagreement. “As our office stated immediately following the Saturday meeting, the two sides were ‘still very far apart’ – and still are today because of the president’s insistence on keeping the government closed over his expensive and impractical wall,” a spokesman for Schumer, Justin Goodman, said Friday.

A spokesman for Pelosi, Drew Hammill, noted that the White House had made no formal outreach to Pelosi since December 11th, when she and Schumer met with the president. Despite Trump’s assertions to the contrary, most Democrats support increased funding for border security. Many Senate Democrats, for instance, voted to allocate tens of billions of dollars for security enhancements in 2013, including roughly doubling the size of the border patrol, creating new electronic monitoring systems and even some additional physical barriers at certain points along the border.

But that money was in the context of a comprehensive immigration overhaul that would have tried to address systemic problems. By contrast, they view Trump’s border wall as a costly and ineffective proposal. What is more, they have pointed to government accounting documents that show the Trump administration has spent only a fraction of the money allocated by Congress last year for a physical barrier along the border.

With no endgame in mind, Trump appears to be boxed in between Democrats who will control the House and have key votes in the Senate and his supporters on the hard right, who have grown more vocal in criticising him.

Trump also reiterated his threat to cut off aid to Honduras, Guatemala and El Salvador as punishment to countries he claimed on Twitter “are doing nothing for the United States but taking our money.” Migrants have been fleeing those countries, choosing to confront Trump’s threats to prevent them from crossing the border over the dangers of life at home. – NYT