These images speak eloquently of 12 months of change, challenge and celebration 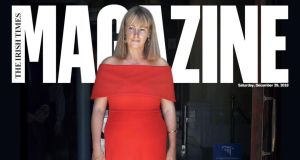 Great photographs capture what words cannot. They command your eye and sear into your memory.

The biggest scandal of 2018 was the appalling news that 221 women had been given incorrect information by CervicalCheck about their smear-test results. The cover image on today’s Irish Times magazine – our Photographs of the Year issue – is of Emma Mhic Mhathúna on the June day she appeared on the steps of the High Court after a legal action that resulted in a settlement for €7.5 million. The red dress she wore had been chosen by her children, and her strength, grace and fury emanate from this photograph by Gareth Chaney, of the Collins agency. Less than six months later she was dead from cervical cancer.

November 2018 saw the western world cast its eyes towards Paris for the gathering of some 70 world leaders to mark Armistice Day. The photograph above, by Omar Sanadiki of Reuters, brings our attention back to Syria, where the estimated four million under-eights have known nothing but conflict. The picture makes us wonder how far this child has travelled. We should probably ask ourselves the same.

Each Irish Times photographer has selected one of their images for this series of outstanding photographs.

Alan Betson’s eerie photograph of Oisín Kelly’s Chariot of Life statue, bristling with icicles, was a reminder that the year started with the Beast from the East.

By contrast, in a summer where the sun shone and shone and shone some more, Nick Bradshaw had a striking photograph of a blue-whale kite flying above Dollymount Strand, in Dublin. In Galway, Joe O’Shaughnessy photographed the installation of a moon floating over Shop Street during the city’s arts festival.

In May, the referendum to repeal the Eighth Amendment to the Constitution, which had outlawed abortion, was carried by two-thirds of voters. On the night of the result Bryan O’Brien went to the mural, in Portobello in Dublin, of the late Savita Halappanavar, where people were writing messages and posting them on her image – a day on which the words “choice” and “repealed” were chanted across Ireland.

It’s hard not to smile at Tom Honan’s photograph of the Ringsend and Irishtown Community Centre May Day parade.

Also in May, I photographed Ricky McDonnell, Ann Lovett’s former boyfriend, who spoke for the first time about his relationship with her, and the events of 34 years ago.

PPAI Photographer of the Year Cyril Byrne was at Dublin’s Mansion House in June to capture the historic arrival of former residents of Magdalene laundries for a dinner in their honour. His photograph is of Jenny Attridge and the forest of hands being extended to her in solidarity.

Homelessness in all its forms remained an essential topic of debate throughout the year. Enda O’Dowd’s photograph of two people sleeping rough, taken on his daily walk to work, illustrates how omnipresent the reminders of our ongoing housing crisis are.

In August a special piece of sporting history was made when the Irish women’s hockey team reached the World Cup final in London. In October, Michael D Higgins was re-elected as President of Ireland; Dara Mac Dónaill’s photograph shows his inauguration on November 11th.

In international affairs, Kathleen Harris travelled to Cox’s Bazar, in Bangladesh, to record the conditions under which the displaced Rohingya refugees were living, and photographed a stoic Rahima Khatun and her malnourished niece, Taslima.

In June, Donald Trump, the US president, was pictured staring bullishly at the German chancellor, Angela Merkel, at the G7 meeting. In September the US Supreme Court nominee Brett Kavanaugh testified in a Washington court against allegations of sexual misconduct while, behind him, the expression on several women’s faces told their own stories.

As Brexit talks stagger towards next March’s deadline, Theresa May performed a curious “happy dance” to Abba at the Conservative Party’s annual conference in October. As 2018 comes to a close, we don’t yet know what kind of Brexit we’ll be facing in 2019, but we can be pretty sure we won’t be seeing another happy dance from the British prime minister.

We hope you enjoy this selection of work. If you would like to see other great photographs that we couldn’t fit in this issue, take a look at our galleries at irishtimes.com/news/galleries.