US Politics: Donald Trump has forced the Democrats to stand up for American power 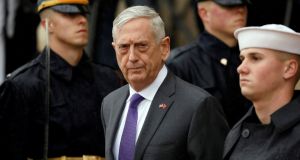 Outgoing US defence secretary Jim Mattis has achieved martyr status among Democrats who did not lament his dismissal by Barack Obama. Photograph: Yuri Gripas/Reuters

In 2013, Jim Mattis was removed from the helm of US Central Command by Barack Obama. Too bellicose by half, was said to be the president’s view of the general, especially on the subject of Iran. The cashiering of Mattis passed without tremendous lamentations from Democrats.

Five years later, a man with the same name and solemn bearing has achieved martyr status among them. “Turn out the lights when Mattis leaves,” tweeted Democratic congressman Adam Schiff, upon the defence secretary’s resignation last week. Senator Chris Murphy pronounced a “national security crisis” at the loss of this one-man check on President Donald Trump.

This is not hypocrisy or opportunism at work. Democrats mean what they say: about the sanctity of alliances that Trump has injured, about gains in Syria and Afghanistan that a drawdown of US troops would risk, about Mattis’s stalwart efforts to avert these various follies. It is just that they mean it now. It took the trauma of Trump’s presidency to focus Democratic minds. The result is a party on a more interventionist foreign policy course than it was following before.

As much as Republicans diagnose their opponents with “Trump derangement syndrome”, the 45th president has not, in fact, made the left reel to the extremes. If anything, he has caused them to embrace establishment ideas about which they were once ambivalent-to-hostile.

People whose views on trade were lukewarm at best now show a Ricardian zeal for the stuff. There are also centre-left deficit hawks of suspiciously recent vintage. And since Trump began to court and flatter Saudi Arabia, liberals have worried about the kingdom’s role in the fomentation of radical Islam around the world. To take religious extremism quite this seriously, much less to attribute it to the ideas themselves, not poverty or grievances against US foreign policy, was not always the liberal default.

These intellectual conversions go beyond policy to ways of seeing the world. Parts of the left took to relativism as it oozed out of the universities in the 1970s. It is now the left that insists on the non-negotiability of objective truth against Trump’s blur of alternative facts.

None of this is to mock. Democrats are ending up in the correct place on lots of issues, even if tardily and for the wrong reasons. Nor is this phenomenon unique to American progressives. It has taken Brexit to create a sizeable and fervent European movement for the first time in Britain. People who had never given the subject a thought have been traumatised into cherishing what they once took for granted. Nothing clarifies the mind like a threat.

But of all the US left’s conversions since 2016, the most consequential for the world could be its renewed commitment to American leadership, up to and perhaps including the military kind. There was nothing inevitable about it. The opposite seemed more likely not long ago.

At least since the Vietnam war soured, Democrats have been coy about the projection of hard power. It is now forgotten that most of the party’s senators voted against the first Gulf war in 1991. After a botched mission in Somalia, Bill Clinton abstained from Rwanda before half-committing to the Balkans. As she ran for the Democratic presidential nomination in 2008, Hillary Clinton’s vote for the Iraq war counted against her.

Obama turned reticence into a doctrine – “Don’t do stupid stuff” – and failed to enforce his own “red line” against Syria’s use of chemical weapons. As late as 2016, he was describing countries in Europe and the Middle East as “free riders” on his own nation’s military largesse, ever-eager to ensnare the US into local squabbles.

“That’s pretty bad, insulting our allies”, said Mattis at the time. He has not changed. The Democrats, to some extent, have. Geopolitical retreat that was tolerated, ignored or supported under Obama (who pledged the withdrawal of forces from Afghanistan before Trump did) is now gamely resisted. Some of this is reflex opposition to a president they despise. The rest is more considered: Trump is forcing Democrats to work out what they think about certain subjects after years of intellectual coasting. Hence the new-found reverence for Mattis.

Either way, a party that was trending towards a mild pessimism about American power now increasingly seethes at the declinists, quietists and isolationists. In seeking to end 70 years of benign US hegemony, Trump might inadvertently preserve it by enlisting the once-wavering Democrats to its cause. Such is the power of his infamy among them. It is no less a legacy for being an accidental one.– Copyright The Financial Times Limited 2018

5 Nigel Farage steps down as leader of Reform UK party