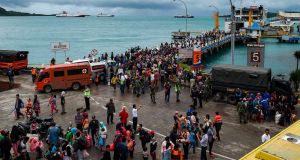 Residents disembark from a ferry at the port after being evacuated from Sebesi Island, in Bakauheni in Lampung province on December 26th, 2018. Photograph: Mohd Rasfan/AFP/Getty Images

Indonesian authorities told people to avoid the coast in areas where a tsunami killed more than 420 people last weekend, in a fresh warning issued on the anniversary of the catastrophic 2004 Indian Ocean earthquake and tsunami.

The waves that followed the eruption of Anak Krakatoa, or Child of Krakatoa island volcano, hit communities along the Sunda Strait on Saturday night.

The eruption is believed to have set off a landslide on the volcano, displacing the water that slammed into Java and Sumatra islands.

Indonesia’s Meteorology, Geophysics and Climatology Agency told people late Tuesday to stay at least 500 metres from the coastline along the strait, which lies between the two main islands.

“All these conditions could potentially cause landslides at the cliffs of the crater into the sea, and we fear that that could trigger a tsunami,” she said at a news conference. She asked that communities remain vigilant but not panic.

The tsunami struck without warning, taking people by surprise even in a country familiar with seismic disaster.

No big earthquake shook the ground beforehand, and it hit at night on a holiday weekend while people were enjoying concerts and other beach and resort activities.

It was a sharp contrast to the disaster that struck 14 years ago off the western coast of Indonesia’s Sumatra island.

An enormous 9.1 magnitude earthquake rocked the area the day after Christmas, creating gigantic waves that surged far inland swallowing everything in their path.

The wall of water killed some 230,000 people in a dozen countries, most of them in Indonesia.

The devastation was vast, and the disaster was among the worst witnessed by the world in recent history.

Recovery was slow, but some victims of the latest tsunami said Wednesday they remember the resilience of the people in Banda Aceh, which is giving them hope that they too can rebuild their homes and their lives.

Beaches were largely empty in the hard-hit area of Carita, and police patrolled the area on motorbikes warning people to stay away from the coast.

Some people defied the order, returning to what was left of their homes to begin cleaning up as heavy rain fell and waves pounded the shore.

Meanwhile, residents of Sumur village, which has been slow to receive aid due to roads being cut off, remained stunned by how quickly the tsunami hit.

The beach, just a few miles from the tourist island of Umang near Java’s western tip, is popular for snorkelling and other water activities.

The tsunami decimated the area, ripping houses from their foundations and bulldozing concrete buildings.

More than 16,000 people were displaced from their homes and heavy equipment was urgently needed in the Sumur subdistrict near Ujung Kulon National Park to help get aid flowing and reach people who may be injured or trapped, said Sutopo Purwo Nugroho, spokesman for Indonesia’s Disaster Mitigation Agency.