US president signs $8.3bn package of emergency measures as cases continue to mount 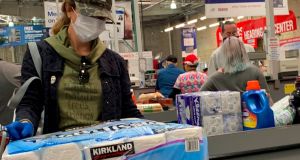 Customers at a Costco in Burbank, California, on March 6th: US president Donald Trump claims he is “doing very well” in terms of addressing the coronavirus crisis. Photograph: Robyn Beck/AFP

US president Donald Trump was facing growing pressure on Friday to respond to the threat of coronavirus as the number of cases there continued to rise.

The number of infected people in New York state rose to 33, with almost 3,000 people in home isolation in the state. Most of them had returned from directly affected countries like Italy, China, Iran and South Korea. A second patient also tested positive in New Jersey.

Speaking in the White House, where he signed an $8.3 billion package of emergency measures designed to tackle the impact of the virus, Mr Trump said he was “doing very well” in terms of addressing the crisis.

He described the coronavirus as an “unforeseen problem,” that “came out of nowhere – but we’re taking care of it”, he added, noting that more Americans would be staying in the US instead of leaving and spending money in other countries.

He said he had spoken to governor of California Gavin Newsom by phone to discuss the ship quarantined off the California coast. It emerged this week that a passenger who had travelled on an earlier leg of the cruise last month in Mexico died from the virus.

Some of the passengers currently on board were also on board for the earlier leg, and may have had contact with the infected passenger. Test kits have been dispatched to the ship, and results were being awaited on Friday night.

The White House was also said to be considering a tax relief package to help airlines and other industries affected by the virus. Earlier this week, Mr Trump hosted the chief executives of top airlines in the White House to discuss the impact of the virus on their industry.

Mr Trump’s leading economic adviser, Larry Kudlow, confirmed in an interview on Friday that the administration was considering “timely and targeted” interventions to help industries affected by the crisis. This could include cruise, travel and hotel providers.

Mr Trump was also scheduled to visit the Centre for Disease Control and Prevention in Atlanta on Friday. The visit had been scheduled last week, but then disappeared from the president’s schedule. The White House said there had been concern about an employee there who was being tested for the disease, but the test had since come back negative, so the trip would proceed.

Stock markets fell again on Friday while the yield on 10-year government debt fell to a record low at one point during trading.

But Mr Trump struck a positive note when questioned about the stock market’s performance earlier in the day.

“I think the country is so strong, we’re so strong as a country now. We have never been like this. The consumer is generating so much because of the tax cuts, the regulation cuts and the things we’ve done. So I think we’re in great shape.”

He also predicted that financial markets would “bounce back soon – as in really bounce back”.