Number of cases rises to four in the North; hospitals impose visiting restrictions 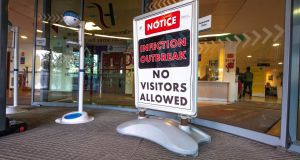 Five new cases of Covid-19 has been reported this evening by the National Public Health Emergency Team.

Three are in the south of the country, one in the east and one in the west.

This brings to 18 the total number of confirmed cases in the State to date.

Chief medical officer Dr Tony Holohan Holohan described 18 as “a small number of cases” and pointed out that all but one could be explained in terms of its origins.

The process of identifying contacts of the cases was working well he added.

“We are still in a containment phase and the change of picking up this disease remains very low.”

Dr Holohan said: “We ask that no organisation, school or health service provider acts unilaterally. We need to respond to the threat of Covid-19 in unison, following the advice of public health [staff].”

He said he would be concerned if some recommendations “happened sooner than appropriate” as this might make it more difficult for the public to understand.

A fourth case of Covid-19 was confirmed in the North by the UK Department of Health on Friday night.

Speaking in Brussels earlier today, Minister for Health Simon Harris said Ireland was “actively preparing” for more cases of the disease, on top of the 13 already confirmed on Thursday.

Mr Harris criticised profiteering on essential drugs and equipment needed to combat the spread of coronavirus.

Mr Harris said anyone sought to profiteer by hiking up the prices of items such as hand sanitisers that the public need deserved “special condemnation”.

He also condemned those “who deliberately spread lies” about the virus and said they were endangering the lives of people and needed to be “called out”.

Earlier on Friday, Taoiseach Leo Varadkar said there are no plans as of now to cancel any mass gatherings due to concerns over coronavirus.

Mr Varadkar said that Ireland remained in the containment phase in dealing with the virus, and said he expected that there will be more cases in Ireland.

Mr Varadkar said: “Detailed guidance is being issued today on events and mass gatherings. We are not recommending at this stage that any major events be cancelled but that of course will be kept under review.

“We do expect that there will be more cases in the coming days, weeks and months and it is inevitable that many people will contract Covid 19 but for the vast majority of people it will be a mild illness. However, some will become very sick.”

The Taoiseach also said the Government has authorised the HSE to open extra beds in intensive care.

“As of now, nobody has needed an ICU bed yet but obviously additional ICU beds will be made available and also additional capacity for isolation as needed, and also discussions underway with private hospitals to use their capacity too.”

“What we may have to do is ask people who are retired healthcare professionals to come back into service if there are significant pressures on our health service in the weeks ahead.”

He also said there would be a “clear solution” next week on income supports for those who need to self isolate.

Meanwhile, the Irish embassy in France has cancelled its St Patrick’s Day reception, a major annual event with hundreds of invited guests.

More than 60 staff at Cork University Hospital (CUH) have been asked to self-isolate following a case of coronavirus at the hospital that was a result of community transmission.

A man who was diagnosed with coronavirus in Cork had been in CUH for up to a week and may have had contact with large numbers of staff and sick patients, before he was tested.

The case is one of 13 which have been confirmed in the Republic. Seven cases were reported by Thursday night, more than doubling the previous number. There have been three cases confirmed in Northern Ireland and more are expected by the day.

A joint statement released by the UL Hospitals Group, HSE MidWest Community Healthcare, and HSE Public Health MidWest, said authorities were working to trace contacts of the four people, who are currently in isolation at the hospital and who are “receiving appropriate care”.

Trinity College Dublin told staff and students on Thursday night it had been informed of a case within the university.

The university and HSE will take “appropriate steps” to contain the further spread of the virus, the email said.

Trinity confirmed that the university would remain “open and operating as normal”, with the relevant section of the campus – the fourth floor of the Trinity Biomedical Sciences Institute and the building’s lifts – closed as a precaution.

The HSE will trace those who were in contact with the individual, according to the email. The university said it would work closely with authorities to ensure the individual receives the best possible care.

Amid growing concern in the health service over the depletion of staff because of the virus, health officials were due to meet on Friday to see how the gaps can be plugged.

The rules in relation to healthcare workers returning from at-risk areas abroad were changed on Wednesday, it emerged on Thursday night. Before this, staff coming back from Italy did not have to self-isolate unless they had been in one of 11 quarantined Italian towns; now, they must stay at home for 14 days if they have been anywhere in northern Italy.

HSE chief executive Paul Reid said 25 new intensive care beds are to be opened at a cost of €25 million to ease the pressure on the health service. An information campaign aimed at raising public awareness of protecting against the virus is also set to begin shortly.

Despite the increase in cases, chief medical officer Dr Tony Holohan said he was not alarmed: “This is what we would have anticipated. It matches the pattern of most other countries’ experience.”

The number of cases was “still small” and officials were confident they can prevent significant further transmission, he told the daily briefing of the National Public Health Emergency Team.

Other than the case in Cork, he said, public health officials could explain how the patients involved were infected.

Despite the surge in cases related to travellers returning from Italy, he said there were no plans to introduce a travel ban for any region.