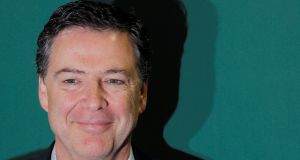 Former FBI director James Comey at an event about his book A Higher Loyalty in New York on Wednesday. Photograph: Lucas Jackson/Reuters

The public battle between US president Donald Trump and the former head of the FBI escalated on Friday after the president claimed that James Comey was prepared to “leak and lie” to make money from a “third-rate book”.

In a tweet on Friday, Mr Trump said that former national security adviser Mike Flynn’s life had been “destroyed” while Mr Comey sought to make money from a third-rate book that “should never have been written”, a reference to Mr Comey’s new book A Higher Loyalty.

“Is that really the way life in America is supposed to work? I don’t think so,” the president tweeted. Mr Flynn, who was fired by Mr Trump after three weeks in the job, has pleaded guilty to lying to the FBI and is understood to be co-operating with the agency.

Mr Trump’s firing of Mr Comey is believed to be at the centre of Robert Mueller’s investigation into Russian interference in the 2016 US election, which is also examining possible obstruction of justice by the president. Mr Comey, who is currently conducting a book tour following the publication of his book this week, has said that Mr Trump is morally unfit for office.

Late on Thursday, the justice department released redacted versions of Mr Comey’s memos documenting his conversations with the US president in the months leading up to his dismissal last May.

Among the revelations in the memos is that Mr Trump questioned Mr Flynn’s judgment weeks before he fired him. In one memo, Mr Comey writes that the president said that his national security adviser had “serious judgment issues” after he failed to tell him about a call from a foreign leader, whose identity was redacted from the document.

So General Michael Flynn’s life can be totally destroyed while Shadey James Comey can Leak and Lie and make lots of money from a third rate book (that should never have been written). Is that really the way life in America is supposed to work? I don’t think so!

Similarly, the newly-released memos claim that the Russian leader told Mr Trump during a trip to Moscow that Russia had “the most beautiful prostitutes”, though Mr Trump repeatedly told Mr Comey that allegations in the Christopher Steele dossier about him cavorting with prostitutes in a Russian hotel room were false, according to the memos.

In an indication of the mounting legal pressures on the US president, Mr Trump’s personal lawyer Jay Sekulow has also announced new additions to the president’s legal team, including former New York mayor Rudi Giuliani.

Mr Giuliani, a long-time friend of Mr Trump, had previously sought the position of secretary of state in the Trump administration. Mr Trump’s team said that Mr Giuliani’s aim was to “resolve” the Mueller investigation as quickly as possible.

Husband and wife team Martin and Jane Serene Raskin, both former federal prosecutors in Florida, have also joined the team.

The new personnel additions come as the FBI mulls an investigation into Mr Trump’s long-term lawyer Michael Cohen after the agency raided his home and offices earlier this month. Mr Trump’s team has gone to court seeking to limit the scope of documents that the FBI can access as part of its investigation.

Mr Trump has consistently dismissed the special counsel investigation as a “witch hunt” and has accused the FBI of being biased against him.

The Comey memos show Mr Trump was particularly preoccupied with former deputy FBI director Andrew McCabe, asking Mr Comey if Mr McCabe was against him. Mr McCabe’s wife had received Democratic donations for a failed political bid in Virginia, an issue that was raised by Mr Trump during the presidential campaign.

This week it emerged that federal prosecutors are mulling whether to investigate Mr McCabe after a justice department inspector general report found he had misled investigators.