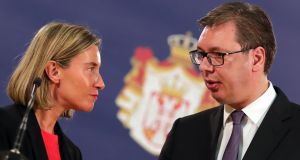 Political tension in Kosovo has eased after Serbs scrapped plans to seek more autonomy in defiance of the government, as EU foreign policy chief Federica Mogherini urged Pristina and Belgrade to do more to improve their relations.

When senior Serbian official Marko Djuric was arrested, frogmarched through central Pristina and deported for illegally entering Kosovo last month, furious local Serb politicians threatened unilaterally to create a so-called community of Serb municipalities (ZSO) unless the government did it by Friday.

Officials in Kosovo, which declared independence from Belgrade in 2008, said such a move would be illegal, and this week the Serbs backed down and announced they would wait a little longer for the ZSO.

“Serbs will not form the ZSO either tomorrow or the day after. We have been waiting for five years, we will wait for those three months, so that no one can accuse Serbs of violating international agreements,” Serbian president Aleksandar Vucic said.

In a 2013 EU-brokered deal, Pristina and Belgrade agreed on the establishment of the ZSO, to protect the rights of Kosovo Serbs and give them broad autonomy. It is yet to be launched, however, and Serbia accuses Kosovo of dragging its feet on the issue.

Kosovo’s ethnic Albanian leaders insist they will create the ZSO, and on April 5th the EU said “the drafting process for the statute has started and will take place within a four-month time frame”.

“They said they would come out with the statute for the ZSO. Serbia will wait for 3½ months, but I tell you now – we will not see it,” said a sceptical Mr Vucic, who claimed to be discussing the matter with the US and Kosovo’s other major western allies.

“When you speak with those much stronger than you, your hands are tied . . . but what remains for you is to fight bravely and proudly for your country,” he added.

Igor Simic, a deputy from the main Kosovo Serb party Serbian List, said: “Many expected us today to act the way Serbs often do – first with the heart and then the head.”

“We’ve turned things around a bit . . . so that no one can accuse us tomorrow of making unilateral moves, or starting some kind of adventure and endangering the peace and security” of Kosovo.

Mr Djuric was expected to visit Kosovo again on Friday, this time having received Pristina’s permission to enter.

In Belgrade during a tour of Balkan candidates for EU membership, Ms Mogherini on Thursday stressed “the need for the full implementation of all the agreements achieved” over several years of often fractious Brussels-brokered talks.

The EU says Balkan states must resolve all disputes with their neighbours before joining the bloc, and Ms Mogherini urged Serbia and Kosovo to forge “a legally binding agreement on normalisation of relations”.

Belgrade’s shaky ties with Croatia were strained further this week, when convicted Serb war criminal and ultra-nationalist leader Vojislav Seselj reportedly stamped on a Croatian flag and hurled insults at officials visiting from Zagreb, prompting them to return home early.