Trump touts tax plans but misses his own filing deadline 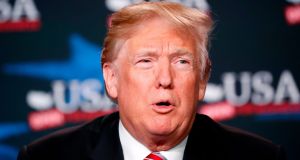 US president Donald Trump sought to deflect attention away from the multiple controversies engulfing his presidency on Tuesday as he touted his tax reform plan as the “most sweeping tax reform in a generation”.

As millions of Americans rushed to file their annual tax returns by midnight on Tuesday night, Trump used the annual tax deadline to highlight the benefits of the recently-agreed Republican tax plan.

In an opinion piece penned by the president in USA Today, Mr Trump claimed that “paychecks are rising, tax rates are going down, businesses are investing in our great country”, adding that this year would be the last year Americans would have to fill out “outdated, complicated tax forms”.

But almost immediately the president’s own tax status came under scrutiny as the White House confirmed that Mr Trump missed Tuesday’s filing deadline and had instead requested an extension for filing his 2017 taxes.

“The president filed an extension for his 2017 tax return, as do many Americans with complex returns,” White House press secretary Sarah Sanders said in a statement, adding that he would file his return by October 15th.

Confirmation that the president has sought an extension emerged as the Inland Revenue Service (IRS) website crashed on Tuesday as workers across America scrambled to submit their tax returns.

Mr Trump has been severely criticised for not publishing his tax returns following his inauguration as president of the United States despite pledges to do so during the election campaign.

As Mr Trump prepared to host Japanese leader Shinzo Abe at Mar-a-Lago in Florida, where geopolitical and trade issues are expected to top the agenda, the meeting looked set to be overshadowed by the swirl of controversies surrounding the president.

Mr Cohen has been thrust into the spotlight in recent months after it emerged he paid Ms Daniels $130,000 from his personal funds

In the latest development, adult film star Stormy Daniels released a sketch of the man she alleges threatened her in a car park in 2011 over her dealings with Mr Trump. Ms Daniels’ lawyer also announced that his client was offering a reward of $100,000 to any member of the public who could help identity the man.

Ms Daniels, who appeared on ABC on Tuesday, was speaking a day after she attended a court hearing in New York at which Mr Trump’s longtime lawyer Michael Cohen sought to limit the ability of the FBI to review documents the agency seized last week.

Mr Cohen has been thrust into the spotlight in recent months after it emerged he paid Ms Daniels $130,000 from his personal funds. Mr Trump’s lawyers are in the process of suing Ms Daniels for violating a non-disclosure agreement she signed, though the president denies ever having had an affair with the adult film star.

In a further development, it emerged during Monday’s court hearing that Mr Cohen has also given legal advice to influential Fox News host and Trump confidante Sean Hannity. In a statement on Tuesday, the network outlined its support for Mr Hannity. “While Fox News was unaware of Sean Hannity’s informal relationship with Michael Cohen and was surprised by the announcement in court yesterday, we have reviewed the matter and spoken to Sean and he continues to have our full support,” the statement read.