Advisers reportedly warned him that the briefings were hurting his campaign 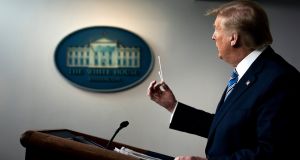 US President Donald Trump hold up a test swab during a coronavirus briefing at the at the White House. Photograph: Anna Moneymaker/The New York Times

After more than a month of near-daily White House coronavirus press briefings, Donald Trump stayed behind closed doors on Saturday after advisers reportedly warned the president that his appearances were hurting his campaign.

Mr Trump himself referenced his absence when he wrote on Twitter that the briefings are “not worth the time & effort”. The president wrote the tweet on Saturday evening, when he would usually be taking the podium to address journalists.

What is the purpose of having White House News Conferences when the Lamestream Media asks nothing but hostile questions, & then refuses to report the truth or facts accurately. They get record ratings, & the American people get nothing but Fake News. Not worth the time & effort!

In recent weeks Mr Trump has used the briefings to dole out unproven and debunked medical advice, suggesting that things like sunlight and an anti-malaria drug are cures to Covid-19, often causing his own medical experts to try to correct the record.

But on Friday Mr Trump surprised observers by taking no questions and stalking out of the room after an unusually short briefing of just 22 minutes. Some took the move as an acknowledgement from Mr Trump himself that he may have taken things too far when he said on Thursday that disinfectant could be used to cure Covid-19.

Those comments sparked shock and ridicule - and warnings from healthcare experts - and prompted Mr Trump to make a ham-fisted attempt at a clawback when he later said he had made the remarks sarcastically - despite video proving he had not.

While the press briefings are meant to give members of the coronavirus task force an opportunity to provide updates on the state of Covid-19 in the country, the attention around the briefings has been centered on Trump’s use of the podium as his bully pulpit.

The president has used the briefings as uncensored airtime, praising his administration for its response to the crisis while criticizing the media and Democrats for any negative comeback.

Advisers close to the president told him to stop making appearances at the briefings unless special announcements needed to be made, according to multiple reports published Saturday morning. The advice comes as Mr Trump trails Joe Biden in polls from swing states. Perhaps, his advisers believe, because his appearances are overkill.

“I told him it’s not helping him,” one adviser told Axios. “Seniors are scared. And the spectacle of him fighting with the press isn’t what people want to see.”

Trump has reportedly been hesitant to end his briefing appearances, Axios reported, because he said they bring in good television ratings.

The president has also used the briefings as an opportunity to rile up his base in a way that would typically be done at his rallies. Mr Trump has criticised Democrats and attacked Biden, referring to him as “Sleepy Joe” during briefings, veering far away from the subject of Covid-19.

It is unclear whether Mr Trump can stay away from the podium, or whether his instincts as a reality television star will kick in and the show will go on.

“He’s going to want to get media attention and control his message,” Sam Nunberg, a political consultant who briefly worked on Trump’s campaign in 2016, told Politico. “He is the only one who thinks he can do his message best, and that’s just the reality. That’s how he works.” – Guardian News and Media