Isolating the sick at home, Italy stores up family tragedies

In a country where many extended families live together, quarantine is almost impossible 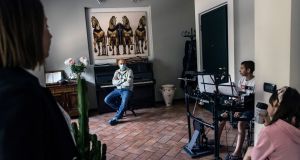 Emanuele Visigalli, who was hospitalized after contracting the coronavirus and later discharged, sits surrounded by his family at home in Codogno, Italy. Photograph: Fabio Bucciarelli/The New York Times

When her middle-aged son got sick, Ruffina Pompei did what she had done for decades, bringing vegetable soup and freshly squeezed orange juice to his room. She slept in an armchair outside his room and changed his clothes. She told her husband (89) to steer clear.

But the coronavirus tore through the apartment. Her son died in a hospital in the region of Abruzzo on March 29th. Her husband died the next day in the same hospital. Pompei (82) was also diagnosed with the virus. “I could not leave him alone,” she said of her son.

Before everyone else in the West, Italians received and largely obeyed an order to stay at home. “I’m staying home” became a hashtag, then the name of a national ordinance and then a motto hung from balconies and windows. But while staying home has worked, reducing the rate of infections, bringing down the daily toll of the dead and creating breathing room for hospitals, home has become a dangerous place for many Italians.

Italian households represent “the biggest reservoir of infections”, said Massimo Galli, director of the infectious diseases department at Luigi Sacco University Hospital in Milan. He called the cases “the possible restarting point of the epidemic in case of a reopening”.

The family acts as a multiplier, said Andrea Crisanti, the top scientific consultant on the virus in the Veneto region. “This is a ticking time bomb,” he said.

The predicament of home infections is emerging not just in Italy but in hot spots across the globe, in Queens in New York city and the Paris suburbs, as well as the working-class neighbourhoods of Rome and Milan. It is also a problem that local officials and epidemiologists say is getting too little attention, particularly as the government has announced tentative steps toward reopening in early May.

Italy’s leading virologists now consider home infections, alongside clusters in retirement homes, to be a stubborn source of the country’s contagion. Living together in close quarters and the failure to move the infected into dedicated quarantine facilities have, they say, paradoxically propped up the curve of infections that “stay home” measures were designed to suppress.

The problem is one the Chinese government bludgeoned quickly. It ordered the roundup of all residents in Wuhan infected with the coronavirus, warehousing them in quarantine camps, sometimes with little care. While that approach may have helped contain the virus, ripping people apart from their homes is anathema to Western democracies, especially Italy, where tight-knit families are the rule.

Italy, like other Western democracies, has wrestled with the difficulty of balancing the containment of the virus with the economic, social and political costs of removing people without symptoms from their own homes. The government has not made isolating patients outside their homes a priority.

“As a doctor I would say let’s put tanks in the streets and let’s do a police state,” said Guido Marinoni, the president of the Bergamo doctors’ association. “But the Western world has different realities.”

Italy has not enacted, or articulated, a clear national effort to prevent contagious people from infecting their households. The country has essentially accepted a controlled tragedy at home as it focuses on preventing a contagion from running like wildfire through the society at large.

“Domestic contagion is the lesser evil,” said Giorgio Palù, a former professor of virology and microbiology of the University of Padova and the former head of the European and Italian Society for Virology. Compared to unleashing the contagion on the streets, it was better to keep the virus in the family. “At home,” he said, “I block it.”

Silvio Brusaferro, the president of Italy’s national health institute, and one of the leading advisers to the Italian government in the crisis, acknowledged that homes were “higher-risk places”, and on Friday, demonstrated that family infections accounted for up to 25 per cent of new cases. But he said that what was essential was that home infections “do not spread further”.

But that offers little solace to the close-knit, multigenerational families decimated by the virus in their own homes – to the infected sisters who lost their father and then saw their grandfather hospitalised in hard-hit Bergamo, to the Campanian hairdresser who lost both her parents, to the metalworker in Voghera who died days after losing his two sons.

Experts have estimated that more than one million people in Italy could be infected with the virus at home. The persistence of cases is telling. Despite a nationwide drop in the number of new infections and deaths, Lombardy, which remains the Italian epicentre, announced more than 5,000 new cases this week alone, with nearly 900 deaths.

Many public health officials say that the actual number of infections could be as many as 10 times that. Federico Ricci-Tersenghi, a scientist at the University of Rome La Sapienza who specialises in theoretical modelling, said that stemming the contagion required facilities like in China dedicated to isolating positive cases.

But Italian officials have clearly determined that housing the infected in dedicated facilities is not feasible. Giovanni Rezza, director of infectious diseases at the national health institute, said that the government did not think that a centralised effort was “feasible, possible, appreciated”.

Italian media have reported that the government is considering making the lifting of lockdowns in Italy’s regions contingent on local authorities providing quarantine facilities for the infected. Experts have also emphasised the importance of contact tracing and early diagnoses, since contagion can also happen before a patient starts showing symptoms.

For now, however, prime minister Giuseppe Conte has largely steered clear of the issue of home infection. A government decree in March allowed local authorities to seize hotels to host patients who cannot safely self-isolate at home. But, as is the case with many of the government decrees, it is being interpreted and implemented differently around the country.

In most cases, only people with confirmed cases can go to dedicated hotel rooms. But the hotel rooms are not available everywhere, and neither are tests for the virus, which in the hardest-hit places are given only to people who have been hospitalised.

Working class Italians often face the hardest choices. In the southern region of Calabria, Paolina Mazza (63), who has the coronavirus, self-isolated at home after her husband was hospitalised with the virus. She expressed frustration that authorities gave her no alternative but to go home, where she tried to keep some distance from her 39-year-old son.

“We don’t have a second house to isolate and they live in a tiny apartment,” her daughter Daniela said. “We are constantly scared.” ” – New York Times